The coastal city soon to be formally known as the Gold Coast looks set to get a facelift this year.

Boasting roughly a million residents, the region that stretches from the tweed to South Brisbane is set to be renamed the Spoon Coast, and have a giant spoon built in the heart of the city.

This comes after the Glitter Strip finished off another appalling sporting season.

With perennial losers the Gold Coast Titans and Gold Coast Suns almost certainties for the Wooden Spoon in the NRL and AFL respectively, it’s been another 8 months of footy to forget.

Those abysmal results have lead to the annual calls to move both franchises away from the cursed region, to ring out again this month.

However, those calls look to be nipped in the bud, after Gold Coast Mayor Tom Tate announced that the region that claims to be a city will be renamed.

“It will give the results of this season more of a homey feel, as this region is becoming the spiritual home of the Wooden Spoon.”

“It’s got quite a nice ring to it too, so let’s hope the next round of AFL draftees can give the region a lift when they are sent up here for the game’s version of military service.”

Tate then refused to answer questions about whether he may have any financial interests in the construction of a proposed giant spoon. 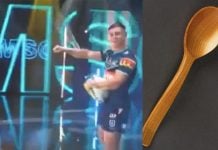