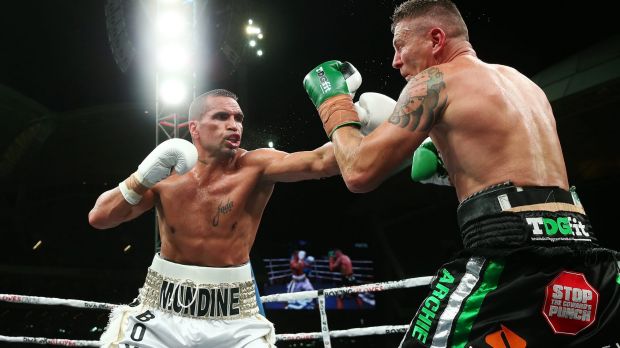 The long-standing racial divide between Aboriginal Australia and the Non-Indigenous has come down to a majority decision at the Adelaide Oval, as two of the ringside judges scored it as a very close fight – one a 94-94 draw, and another a 96-94 win to Danny Green.

A fight that could have gone both ways, came down to a points decision. To the cheers of Western Australians and other people who are offended when people decide to boycott the national anthem.

Anthony Mundine, the Indigenous Australian athlete who has for many years attracted criticisms for not only his conversion to Islam, but also the fact that he keeps bringing up the fact that he is Indigenous, came into the fight battling the stigma that surrounds vocal Aboriginal people.

While the battle between white versus black eventually went the full 10 rounds, the fight nearly ended within 30 seconds when Mundine landed a controversial punch straight into Green’s kidneys, just as referee Frank Garza called a stop.

Green was noticeably affected by the punch, and his camp called the ringside doctor to check on his health. The doctor wanted to stop the fight, but Green demanded he be allowed to continue, so as to prove that he was the better fighrer.

Mundine was deducted a point for the foul and replays showed Mundine clearly hit Green while the West Australian was watching the referee, prompting a wave of angry reaction from boxing purists and people that supported Green.

Ring announcer Bruce Buffer took exception to the judge who scored the fight 98-90 in Green’s favour, saying he was way off.

“Without a doubt it was a close fight and maybe could’ve gone either way,” he said. “I don’t know how other people scored it. But the one score of 98-90 … I don’t know what he was looking at.

“It wasn’t a pretty fight, but it was a real fight.”