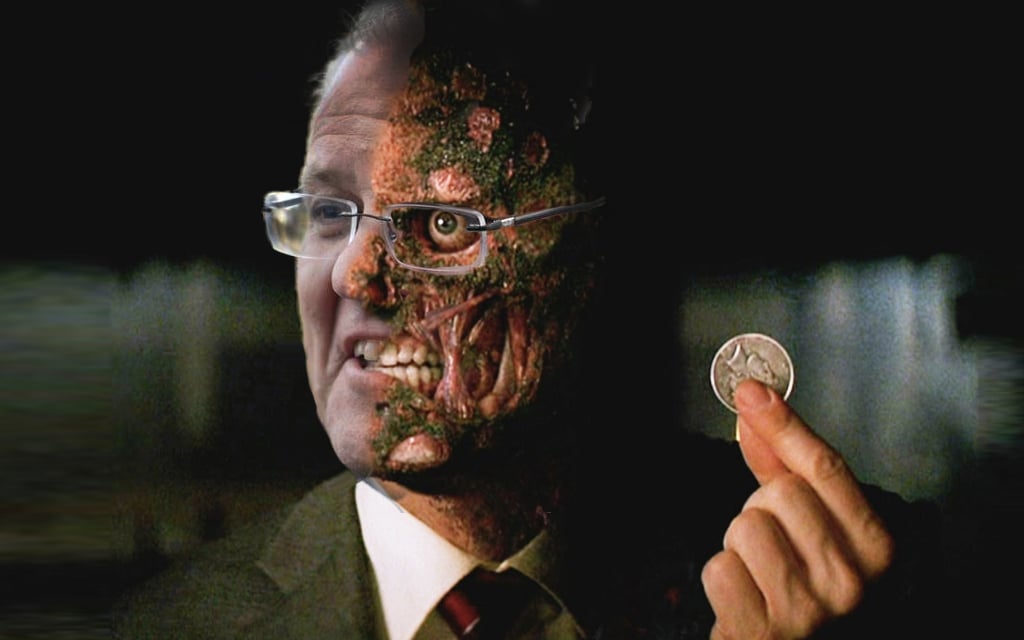 Prime Minister Scotty From Marketing has today fronted a press conference with hideous scaring down the left side of his face, a physical ailment that has caused almost immediate changes to his political approach.

The scars are believed to be the result of an an acid attack from the NSW Treasurer Dominic Perrottet, who has grown tired of calling for JobKeeper to be re-instated to help struggling Sydney workers.

The spat between the deeply religious Perrottet and Morrison reached boiling point in a National Cabinet meeting last month when the Prime Minister exposed himself as very bad Christian by telling Berejiklian’s right hand man to ‘Fuck off’.

Once a bright and upstanding marketing executive, it appears that the factional acid attack from within the NSW Liberal Party has only cemented Scotty’s two-faced persona, accelerating his descent into insanity with a criminal obsession with duality of man.

Sources within the Prime Minister’s office say that Morrison is now making all important decisions by flipping a coin.

This concerning new approach to the pandemic has seen the Prime Minister has change his attitude towards the virus, as he warns state and territory leaders they must not be afraid of new cases rising once enough of the population is vaccinated against the virus.

“We must adjust our mindset. Cases will not be the issue … dealing with serious illness, hospitalisation, ICU capabilities, our ability to respond in those circumstances, that will be our goal.”

“We must live with this”

“But, I think things will be okay… I guess. Don’t hold me to that”

“I’m just going off what the coin told me”

“But… yeah. It’s like, gotta get better from here? right?”

“The night is darkest just before dawn”