As national debate rages over the proposed changes to the marital act, religious federal politicians such as Tony Abbott and Scott Morrison have taken to convincing Australia’s working class into ticking NO in the upcoming postal vote – in a protest against political correctness.

However, while the Christian Lobby and far-right factions of the Liberal party are making some traction in the suburbs, there is one particular community of blue-colour Australians that will be voting yes without question.

The NRL player’s association, audiences, referees and executives have today released a combined statement confirming their unequivocal support for marriage equality in Australia.

Prominent members of the Australian rugby league community say this stance comes from years of involvement and integration within the gay and lesbian community through harmony programs and the Mardi Gras – but it’s mostly because of Ian Roberts.

“We all saw what Ian did to Gary Jacks’ head in 1992” said a rattled Todd Greenberg, NRL CEO.

“We would encourage all of our viewers and fans to vote YES… Please. Don’t fire up Ian”

Colloquially known as ‘The Most Violent Man In Rugby League’ as well as ‘The Gay Cowboy’ – Ian Roberts was the first openly homosexual professional sportsman in Australia – and still the only one to play in any of the football codes.

Roberts came out as gay in 1995 – and was met with support from across the code – with The NRL Footy Show hosts Paul Vautin, Peter Sterling and Blocker Roach appearing in poster campaigns against homophobia conducted by the Lesbian and Gay Anti-Violence Project.

Speaking to the media today, Ian Roberts chuckled at the suggestion that he would jersey-punch anyone who decided to vote NO to same-sex marriage out of hate – but his laugh lasted a bit too long and it scared our reporters into thinking they themselves were about to get Gary Jacked. 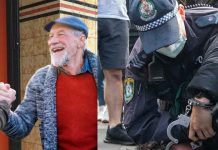 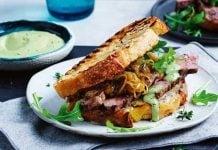