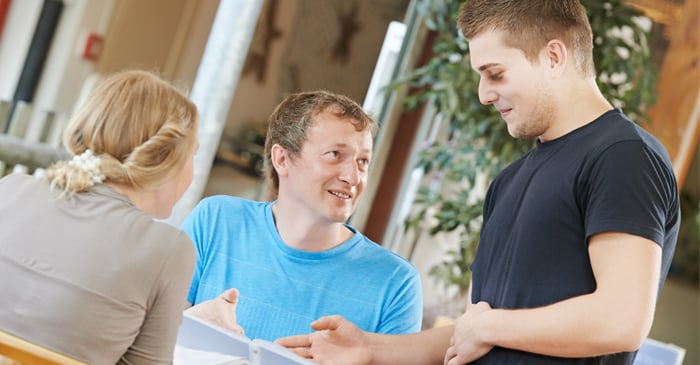 Local Dad Ken Gillespie (59) is really enjoying giving it to the hungover waiter at a family breakfast this morning, it has been confirmed.

While celebrating his daughter’s 23rd birthday at a prominent inner-city cafe, Mr Gillespie was quick to notice that the young bloke serving them had a sickly Tasmania pallor and still smelt a little bit like the Moreton Bay porridges he was drinking all night.

“Have a big one last, mate!?” says Gillespie, as his wife begins pinching his leg under the table, out of fear that he will take it too far.

“Jeez you look like you did a job of it [laughter]”

The waiter Sam Patinson (19) joins him for a guarded chuckle, secretly hoping his boss doesn’t overhear the exchange.

“Of course, it was ‘hospitality end of week’ last night. What are you? A communist?” said Sam.

“Get me the eggs, and try not to drop them haha”

The entire Gillespie family are now exchanging looks of sympathy with Sam, while their patriarch continues to mercilessly heckle him.

“No problems,” says Sam, before making the biggest mistake of his hospitality career by tripping over a nearby chair and spilling a boiling hot long black down his apron.

“ha ha ha ha ha!” roars Gillespie, ignoring the fact that the coffee was meant for his wife.

“Jesus! What time did you finish up last night?!”

Sam the waiter is now forced to admit his guilt and informs Mr Gillespie just how bad of shape he is in.

“I drank a black rat through my nose last night,” he said.

“It was really fizzy”