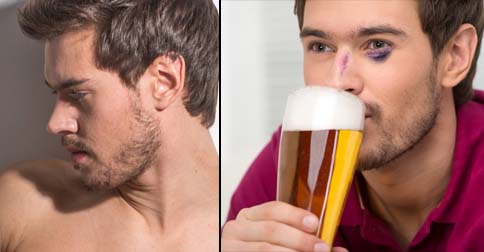 “I’m not the girlfriend type,” says a half-drunk Eddie.

The north-Betoota man sips from his schooner of XXXX Bitter and continues.

“I spend most of my weekends getting on the grog at the pub, usually I do pretty well with the ladies, but if not, I usually go looking for a stink (one-on-one fistfight)”

Eddie Barkdale is a 26-year-old health and supplement rep originally from the Gold Coast. As a self-confessed “fitness fanatic” and “piss-wreck”, Eddie does a good job of hiding the fact that he suffers from a lack of emotional depth, a condition that plagues young men Australia-wide.

“I don’t know what it is hey… I used to cry and shit when I was a kid. But I don’t anymore”

Eddie claims that while his condition can be quite debilitating, he and several of his close mates have worked hard towards a lifestyle that combats the effects of being emotionally stunted.

“I mean we go to the pub a lot, but we don’t talk about gay shit too often,”

“Politics, our feelings, our emotional interactions with the opposite sex… all that stuff is pretty much a no-go”

“We prefer to get a skinful of piss and talk about sport, people we don’t like and how much of a fuckwit the security guard is”

Eddie and his friends aren’t alone. A growing body of evidence from both Australian and overseas studies has explored the association between emotionally inept men, alcohol and violence – identifying a range of factors that have been identified as important predictors of incidents which result in someone getting the fuck kicked out of them.

The characteristics of alcohol-related violence include:

While many berate Eddie’s lifestyle, he says he wouldn’t change it for the world.

“Blokes like me get pushed around every minute of the day… bosses, parents, sisters, girlfriends, bouncers, coppers.”

While Eddie agrees a girlfriend might calm down his tendency for alcohol-fuelled violence, he can’t see himself getting one of them any time soon.

“Girls are hard work. Talking to them and shit is hard. I prefer to just hit and quit,”

“The last missus I had laughed at me when I accidentally spilt a drink in her kitchen. Can you imagine the damage I did in the pub that night? Some poor bloke got the shit kicked through him”