Political commentators and Australian country music fans are up in arms this morning after it has been revealed that former independent MP Tony Windsor and the current member for Kennedy, Bob Katter, have teamed up to release a Slim Dusty tribute album.

Both men appeared on Channel Nine’s Today Show this morning to unveil their new collaboration. Something that they say has been a long time coming.

A live cross with both the political heavyweights in the early hours this morning ended in hilarity as Karl struggled to control himself upon hearing the news that both men were preparing to release a three-CD-box-set of Slim Dusty covers.

“But Bob… you are still a member of parliament. How on earth did you find the time to do this?

“More so, how did you expect the public would react when they found out you had spent the last six months in a Tamworth studio playing guitar and singing bush ballads”

This was met with a stern and snappy response by Tony Windsor, who was crossing live from his family home in Werris Creek.

“Watch your tongue, Karl. This is far more important to the people of Australia than you may think”

“Bob has spent a lot of time with James Blundell (former KAP candidate and notable Australian country musician), he knows his stuff. We started talking about this years ago. Back when we had the balance of power.”

“We realised back then just how important we are. Australians listen to what we have to say… So obviously we took the chance to educate them on the greatest Australian singer/songwriter that ever lived”

The album, which is due for an April release, has been touted as the most controversial collaboration in the history of Australian Country Music.

Titled “Songs That Are Enjoyed By Independent Politicians” – both men state that the album is a result of thousands of hours slaving in the studio – with help from many different country musicians and political identities along the way.

However, the men weren’t being taken as seriously as they would have liked.

“[Laughter] I’m sorry Gentlemen, but this is absolutely ridiculous. I can’t believe what you are telling us,”

“This thing took six months to make? and now you are planning a tour!?”

In response to Stefanovic’s condescending tone, Bob Katter didn’t hesitate to tell the Channel Nine journalist just what he thought of “people like him”

“Karl, I’m going to remain as calm as possible here. But you know me very well. You’ve been to my place, we’ve been in the pub together, we’ve been to church together… we’ve even shot clay pigeons together…”

“You should know that both Tony and I are the absolute authority when it comes to regional Australia. Forget Barnaby, forget the lot of them. We are the voice of these people and we communicate their feelings to the smug, city-dwellers like yourself,”

“Right now, Australian country music is in dire straits. The people are concerned. Lee Kernaghan is old news, Keith Urban sounds like he grew up in Nashville. The people need a new Slim Dusty and they need one real soon,”

“We are both filling that void until someone else comes along. Have a listen to our album and you’ll understand.”

The interview, which was broadcast live at 6:30 AM this morning, has since been taken down from the Channel Nine website after numerous threats from die-hard fans of the late Slim Dusty. One angry punter took to twitter to describe his anger at Karl’s “disgusting” attitude towards the greatest Australian bush poet.

“If I see Karl make one more jab at Uncle Slim… I’ll be getting the next Countrylink train from Walgett to Central, transferring to the North Shore line, getting off at Willoughby and flogging the shit out of him on set.”

The entire tracklist for “Songs That Are Enjoyed By Independent Politicians” 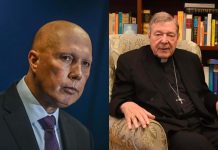