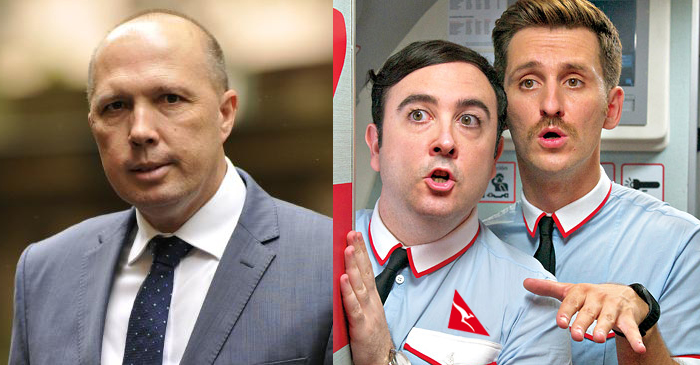 Immigration Minister Peter Dutton has launched an attack against chief executives who urged Malcolm Turnbull to put the legalisation of same-sex marriage to a parliamentary vote.

Dutton says that Qantas, Australia’s longest-running airline and the largest employer of male flight attendants, have no business promoting political policies that might make their employees feel a little bit better about their place in the world.

In a speech to a Liberal Nat­ional Party state council meeting in Cairns, Mr Dutton singled out the also-gay Qantas boss, Alan Joyce for joining more than 30 high-­profile executives in penning a ­letter to Mr Turnbull.

“Tens of thousands of customers and staff who fly with a company like Qantas, for example, would have strong views about an issue like gay marriage. Both for and against,” Mr Dutton said.

“Qantas claims to be the spirit of Australia. Well, I would argue that by publicly supporting a marginalised – they aren’t being very Australian at all”

Dutton says that these CEOs are not in a pursuit of a greater return on capital or a better service for customers — but are talking about all of this gay stuff becuase of a personal agenda, that just so happens to align with the opinions of 70% of Australian who do support gay marriage.

“And the issue here is not gay marriage, it is activism with other people’s money. And where does it stop?”

“Does it stop when we finally legalise gay marriage? When our nation’s businesses are no longer joining the majority of the country in supporting legislation that a few bible bashers in parties backbench oppose?”

“Who knows. But Qantas should stop being so gay”

It is not yet known if majority of Qantas’ employees agree with the comments made by their CEO but judging by the flamboyant mannerisms of their flight staff, one would assume that most of the organisation are pretty cool with gay rights.

Other companies that are cool with gays include: Deloitte, Optus, Telstra, Holden, Apple, Amex, ANZ, CBA, REA Group, the NRL and MYOB.