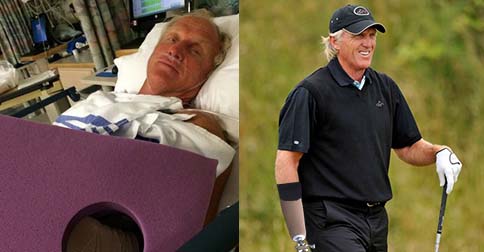 GREG Norman has returned to the golf course for the first time since his chainsaw accident.

In September last year, Norman injured his left hand with the power tool as he trimmed a tree in his Los Angeles garden.

However, The Daily Mail revealed in December that Norman had in fact lost his hand due to infection – just below the elbow.

It was thought that he’d never be able to play golf again.

After spending 331 weeks at the top of the world’s golf rankings throughout 1980’s and 1990’s, the golfer admits that was a hard pill to swallow.

“It was like somebody telling Mike Tyson he wouldn’t be able to punch someone in the head anymore,” said Norman.

“It rocked my world,”

The 59-year-old said he’s had to do some “serious soul-searching” in the past months as the reality of his situation kicked in.

“My name is synonymous with golf. I’ve built a global golfing business over the past decades and I saw it slipping though my fingers,” he said.

The former world number one consulted leading prosthetic specialists around the world as he begins charting his road back to the fairways.

“I’m better than I was ten years ago,” he said.

“This new titanium set-up allows me to get some real hurt on the ball,”

“I’ve been hitting the back net at the driving range consistently, that’s close to 350 yards (320m).” he said.

Norman was quick to squash rumours that he was planning a 2015 Masters comeback, saying that his iron and putting game needs to improve.

“I can drive pretty good now but my short game has gone to shit,” he said.

“But I’m not ruling anything out just now. Who knows what the future has in store? Because a bionic great white shark will be unstoppable.”