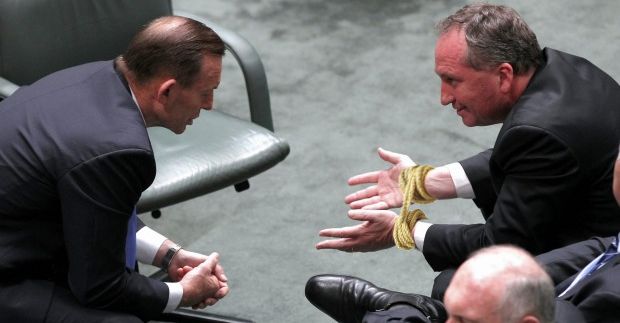 FARMER’S FRIEND AND agriculture minister Barnaby Joyce has revealed today that he will unfortunately have his hands tied up for the rest of his political career.

From today, Joyce can choose to have his hands tied by Chief Government Whip Scott Buchholz should he feel the need to stand up for the region and industry and voted him in to power.

The controversy comes as Joyce failed to fight the highly contentious Shenhua Watermark coal mine in his NSW electorate, which was approved yesterday by Environment Minister Greg Hunt.

Joyce wrote that the approval of the mine is ‘unfortunate’ but the real blame lies elsewhere – not with him or his party colleagues.

“The fault of this goes right back to who gave the exploration licences,” he wrote.

“But my hands are tied, which means I can’t do anything about it. Sorry,”

Although being especially vocal on his Facebook page, the agricultural sector has ‘slammed’ Joyce for not doing enough to prevent the destruction of prime farmland.

“When I was a boy, my Dad would tell me that this farming country was the best there is,” he said.

“But like my old man, those days are long dead and buried. I’d like to elaborate more but my hands are tied.” he said.

Mr Carton’s sentiments have been echoed by other farmers in the region, who now say that they can’t even trust The National Party to protect them now.

The paper addressed issues surrounding farm businesses, “especially those of a smaller scale”, which are vulnerable to “anti-competitive market behaviour or unfair market practices” but aren’t vulnerable to “open cut mining” and “water table destruction”.

Mr Joyce has staked his political career on promises to defend the interests of family farms against threats from mining companies, and has opposed overseas government-backed companies owning farmland but this time around his hands were tied on those issues.