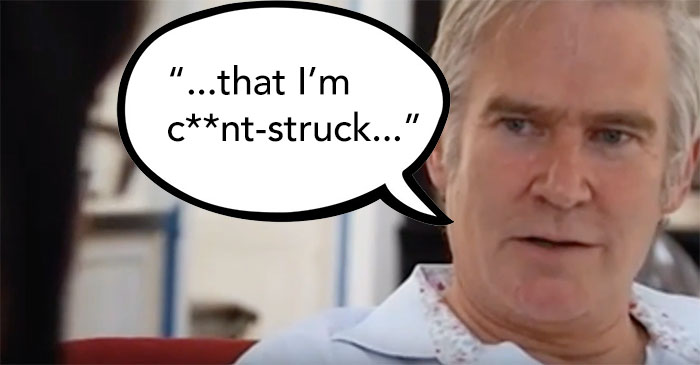 SIX MONTHS AGO, FOUR CORNERS introduced us to a new adjective in the Australian vernacular.

While you might’ve heard that term used before, in a public house or football field, it was the first time that the crude term was broadcast into millions of living rooms.

It was used by Michael Lawler, the husband of disgraced former union boss Kathy Jackson, when a Four Corners reporter asked him to describe the way that people perceive their relationship.

“I’ll be characterised as that scumbag, crook, fraudster and, at the very best, somebody who’s been bewitched by an evil harridan, namely Kathy; that I’m c**t-struck and that I have been utterly, taken in by somebody who is a serious crook.”

However, the word has now been officially added to the Macquarie Dictionary, the most up-to-date record of Australian English as it’s prevalence has been on the up-and-up since the initial broadcast in December of last year.

The original episode that contained the ‘cunt-struck‘ aired on the 15th of December last year.

Editor of the Macquarie, Sally Coyle, says that she expects the inclusion to be controversial, but none-the-less warranted.

“There has been a substantial debate between academics of this particular term,” said Mrs Coyle.

“But my decision became set in stone when my son, in the heat of passion, described my layabout grandson as being ‘a cuntstuck wok-eyed moody bag of sheep shit tit-sucking bludger’, I knew that it’d gained enough relevance to garner inclusion into our Australian record of words,”

“Hearing it used between such iconic Australian phrases like ‘tit-sucking bludger’ and ‘wok-eyed cunt’ made my decision much easier,” said the 78-year-old.

The latest copy of the dictionary will go into print later this year.