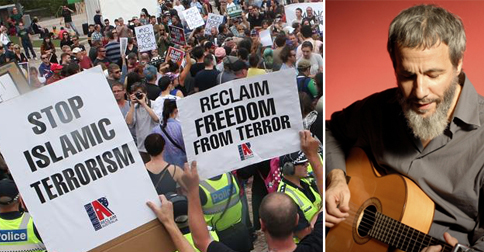 THOUSANDS OF AUSTRALIAN NATIONALISTS are being universally laughed at this week after it was revealed that their official anti-Islamic rally anthem belongs to one of the most well-known Muslim rock stars of all time.

Protests across Australia took place over the weekend, with clashes between anti-Muslim and anti-racism demonstrators. The Reclaim Australia movement as well as the United Patriot Front are two of the organisations advocating peace, sprinkled with xenophobic sentiment.

However, in all of the Islamophobia, it seems the protestors have missed the mark when it comes to their anti-Muslim lifestyles.

Yusuf Islam is a devout Muslim after converting from Greek Orthodox in his early thirties.

Brisbane based rock-enthusiast and former-Reclaim Australia member, Morgan Turinui says it was at the moment that he knew the Reclaim movement was just a “bunch of inbred half-wits”.

“If they claim to be 100% concerned about Australian culture, please tell me why they were playing songs written by a Pommy-Wog Muslim?”

“Mate, they are banging on about how Muslims offer nothing except for terrorism and domestic violence…. But they were just blaring Yusuf Islam as loud as they could, I thought it was a f**kin’ joke… seriously”

In another example of misappropriated rock anthems, Australian rock icon Jimmy Barnes has taken to social media to explain his concern about his music being hijacked by racist extremists.

A series of Reclaim Australia rallies were held around the country over the weekend.

In Melbourne, police were forced to use capsicum spray as anti-racism protesters clashed with nationalists.

Federal Coalition MP George Christensen caused controversy by addressing the Reclaim Australia rally in Mackay. The overweight politician made provocative remarks about his idea of “Good and bad Muslims” to the hundreds of underachieving Australian culture activists.

“There are currently four Muslims that live in Mackay and it is quite clear that they are doing everything they can to change our culture! I will die defending our culture against the outsiders.”

Mr Christensen then proceeded to sing an accapella rendition of “Never Tear Us Apart” by INXS.

Former Federal MP Pauline Hanson also addressed a rally in Rockhampton, saying she was “against the spread of Islam” and that Islamic kebab store owners are “saturating the take-away food market”