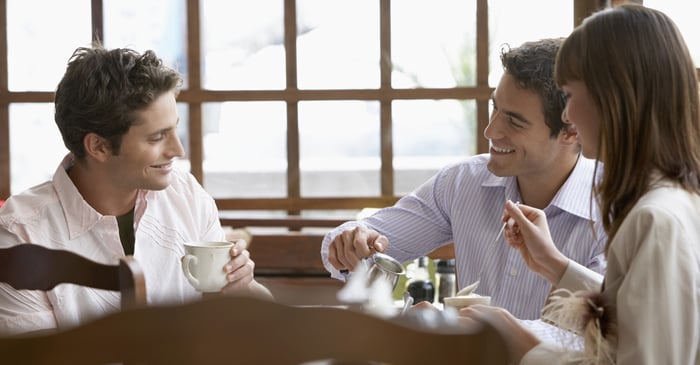 Local man, Troy Liston can’t believe some of the shit his girlfriend’s gay best friend, Ted, gets away with saying to her.

While tagging along on their weekly coffee date, Troy says he was blown away by some of the remarks he heard Ted throwing around in front of his partner of three years this morning.

“Obviously the context is a bit different coming from a flamboyant homosexual florist,” he says. “But never in my life would I even dream of saying ‘shut up you bitch’ to Leesa,”

“She’d hold on for that kind of thing for two months and kill me in my sleep.”

Troy says he was aware of Leesa and Ted’s unique friendship well before he sat through the two and half hour ‘catch up’ this morning, but points out that their gossip-fuelled exchange of insults were much more noticeable given the unnecessary earful he had received from his girlfriend after politely asking her to ‘hurry up’ before leaving the house earlier.

“Then he told her that she was stupid for not remembering the name of his ex-boyfriend. She just responded by saying ‘shuttt up’ and giggling,”

“I mean, he’s got a fair point with some of this stuff, but a lot of it is borderline misogyny… ”

After being shot several death stares by Leesa upon the suggestion that maybe it was time to wrap up their coffee date and start thinking about lunch, Troy says Ted referred to him as ‘mouth-breathing cave man who was always in a hurry.’

Ted’s comments were met with a giggling reception from Leesa.

“If I even tried to join in on their ‘banter’ I would have left them both in tears. I’m just not cute enough when I tell people to shut the fuck up,”