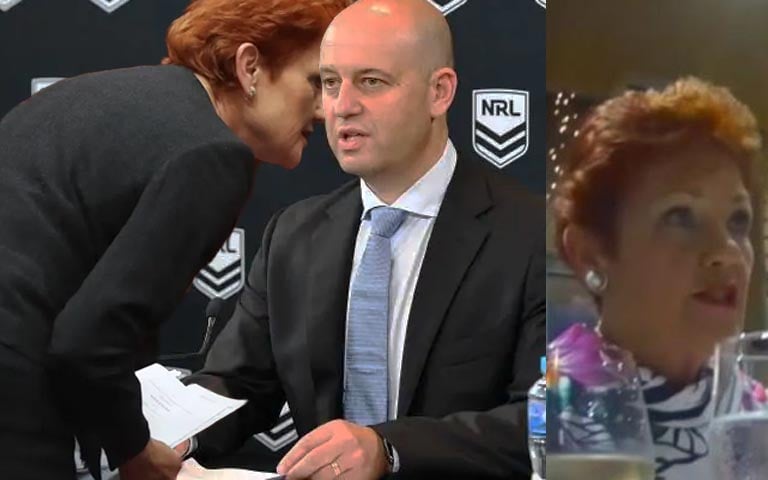 Pauline Hanson has today paid an unexpected visit to the NRL Central to seek advice from the rugby league executives on how to best deal with damaging video footage that has the potential to fuck your entire organisation.

This follows the release of a damning two-part investigation into One Nation’s attempts to undermine Australian democracy by meeting with American gun lobbyists and asking for $20 million dollars in exchange weakening or nation’s firearm laws.

After already trying twice to defuse the humiliating documentary

Hanson briefly spoke to CEO Todd Greenberg before discovering he was Jewish, and therefore an enemy of her political party.

She then opted to swallow her pride and meet with former Queensland Labor Premier and current NRL Chairman Peter Beattie, who she considered the lesser of two evils.

Peter Beattie allegedly told Pauline Hanson her best bet was to introduce a no-fault ruling that would see the immediate dismissal of any employees who are facing up to 11 years in prison.

Pauline Hanson is believed to have said this might be a bit difficult considering the gun-loving white supremacists she has been vetting for pre-selection the upcoming Federal Election.

Beattie then told the One Nation leader that realistically she’s got no leg to stand on.

“This is a bit more than just a sex tape. You are all caught on camera admitting to collusion with some of the most dangerous movements in world politics”