LOGISTICS PROFESSIONALS: In one of his many press conferences you didn’t see this week because 70% of the Australian media market is controlled by Rupert Murdoch, Opposition Leader Anthony Albanese has today offered up a solution to the Morrison’s government’s incompetent jab roll-out programme.

Speaking to the ABC or the Guardian, or whoever the fuck goes to his press conferences, Albo said he had great concerns that Scotty’s new plan of handing over to the private sector might slow the programme down ever more – given that the PM’s mates in mining and banking really have about as much drive as he does when it comes to delivering tangible benefits to the general public.

“The private sector will make an even bigger mess of this” says Albanese.

“Scotty is just excited that he’s found a way to pay a couple hundred million more dollars to his corporate mates. He doesn’t give a fuck if we actually receive our jabs”

Instead, Labor is calling for Morrison to hand over the reigns to the several hundred suspected criminals that have been arrested in last month’s Operation Ironside sting.

The operation, jointly conceived by Australia and the FBI, saw a trojan horse messaging app secretly distributed among criminals, allowing police to monitor their chats about drug smuggling, money laundering and murder plots.

Targets included drug gangs and people with links to the mafia. Albanese says these are the exact people we want running our jab roll-out.

“These are the types of criminals we actually want in charge of our logistics. Not the corrupt Liberals in cabinet or the white collars in Martin Place’

“Give it to the bikies. They’ve proven time and time again they can meet deadlines and deliverables”

Drugs, weapons, luxury vehicles and cash were also seized in the operation, which was conducted across more than a dozen countries. This included eight tonnes of cocaine, 250 guns and more than $48m in various worldwide currencies and cryptocurrencies.

Albo says it’s a no brainer to let these blokes out and give them the task of making sure 80% of Australia is immunised within the year.

“They don’t fuck around with bureacracy either.” he says.

“Put it this way, Australia has never been at the back of the queue when it comes to illegal cocaine shipments.” 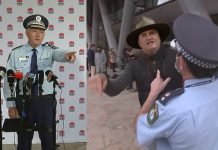