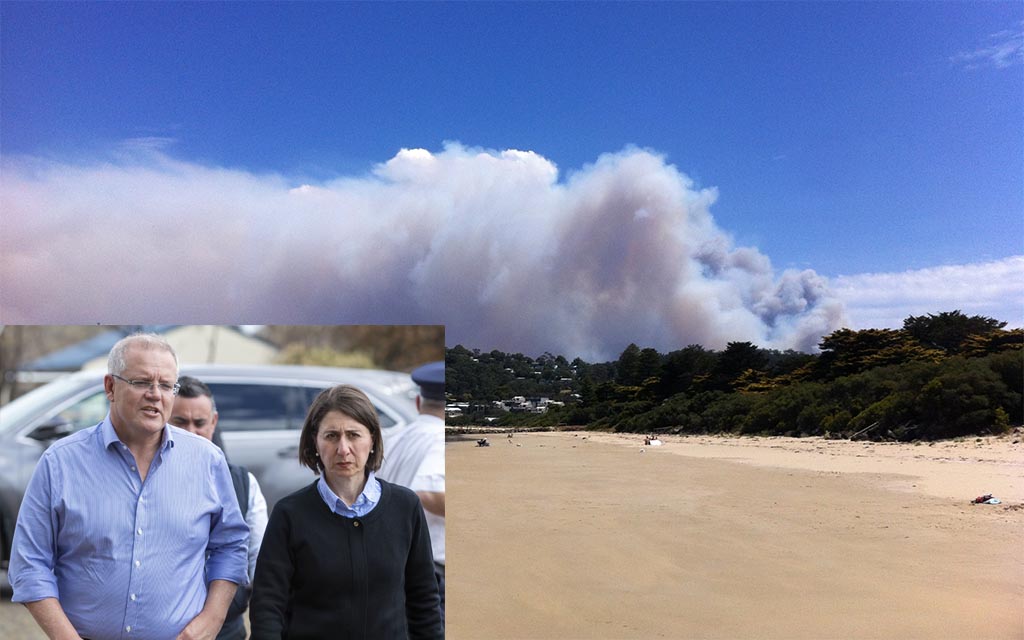 The State Government of NSW and the Federal Government are remaining confident this morning that the bushfires currently plaguing large throngs of the eastern seaboard will be halted once they reach the sea.

Speaking to the media this morning in a joint press conference, Prime Minister Scott Morrison, who’d chosen to at least wear a pair of trousers for this doorstop, begun by paying tribute to the firefighters.

Premier Gladys Berejiklian went on to explain that she’d been in contact with the head of her state’s Rural Fire Service about what potentially could happen tomorrow with the fires.

It’s due to be nearly 40 degrees tomorrow along some parts of the NSW coast and that’s got everyone, including the political class, on edge.

“Right now, we don’t know anything for certain,” she said.

“One thing we do know is that the Tasman Sea has never caught fire before. Well, maybe the Alexandria Canal has a few times but that doesn’t really count. We are confident that the bushfires will be halted once they burn through to the ocean.”

When asked if that means the hundreds of thousands of homes, farms, businesses and people that sit between the ocean and the bushfires to be sacrificed on the Altar of The Go, the Prime Minister sighed.

“Yes – and it will be a tragedy of epic proportions. But we send our prayers and ask God for mercy at this time,” said Scott.

Premier Berejiklian went to say something but decided, in her better judgement, not to say anything at all.