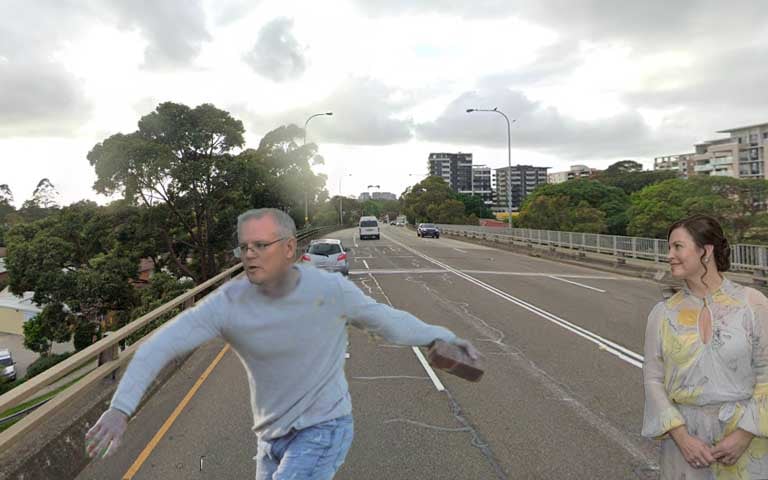 Prime Minister Scott Morrison says he is taking a stand to ensure that people are safe from being hit by bricks when driving under overpass, after a chat with his wife regarding this issue last night.

It is believed that Morrison was reportedly hurling jagged bricks off the side Grand Parade overpass last night, without a care in the world for any of the motorcars or trains that may have been damaged by the projectiles.

With the horrifying sounds of tyres screeching, babies crying and cars piling up below him, it seems the Prime Minister thought there was nothing wrong with what he was doing.

Luckily, he was eventually stopped by his wife, who gently urged him to think the humanity of other people who could be killed by one of the missiles – ultimately convincing him to not commit the mass murder of his own constituents.

Speaking this morning, the Prime Minister said a conversation with his wife Jenny changed his perspective.

“Jenny and I spoke last night,” he said.

“And she said to me, ‘You have to think about this as a father first. Think of our girls. Imagine if they had their licenses and were driving underneath this overpass that you are throwing bricks off”

Mr Morrison said he wanted to make sure any person trains and vehicles including his wife and daughters, if they ever decided to not be driven around by a commonwealth chauffeur, were confident about their safety – and safe from being injured by a flying brick in the outer suburbs of the Sutherland Shire.

“Jenny has a way of clarifying things; she always has.” he said.