With last night’s Four Corners exposè providing even greater insight into the limited brain function of Home Affairs Minister Peter Dutton, the Member For Dickson has been officially bestowed the exclusive and hard-fought title as ‘the dumbest cunt in politics’.

This has been decided upon by general consensus, as the nation takes into account Dutton’s ability to continually be caught out engaging in high level corruption across every facet of his role as the minister responsible for ensuring that our politics and national security is not eroded by foreign opportunism.

But the question remains: Is this just a result of him forgoing any form of education outside of high school and his decade spent holding a radar gun on the Bruce Highway?

Or is it the two decades he has spent in politics that has limited his cognitive abilities to problem solve and plan ahead? Is there anyone out there as stupid as the cunt? We decided to find out with a quiz.

Answer the questions below and add up your numbers at the end to find out where you sit on the Duttometre:

Do you organise leadership spills against your Prime Minister, but lack the required numeracy skills to be able to add up big numbers over 10 and end up losing to a third contender? YES (1) NO (0)

Did you fly the family down to Canberra to watch daddy’s victory speech, before having to fly home with them after the Liberal Party sent on The Nightwatchman instead of you? Only to return to Brisbane to find your own local constituents had thrown bricks through your office windows overnight? YES (1) NO (0)

Have you at any point signed over a $420 million contract for an offshore detention security provider, only for a simple google search to find that the company is run by your mate out of beach shack in South Australia? YES (1) NO (0)

Do you take a hard stance on borders and visas for anyone who isn’t a hot little au pair that the AFL CEO asked you to fast track into the country because his blue blood cousin is struggling to find a babysitter? YES (1) NO (0)

Have you cancelled the previously approved visa of a young women fleeing from honour killings in Saudi Arabia while the whole world is watching and force Canada to pick up the slack and provide her with an emergency citizenship status before her family murders her for deciding she doesn’t like being Muslim? YES (1) NO (0)

Do you honestly believe people in Melbourne are too scared to go out to dinner because of African pre-teens playing basketball in the street? YES (1) NO (0)

Did you only win your seat by 1.5% to a nameless Labor candidate despite being the local member for 15 years? YES (1) NO (0)

Did you blame that near loss on bikies revving their engines outside your electoral office? YES (1) NO (0)

Are you included in a Family Trust that has interests in Childcare centres that receives government subsidies and has a documented relationship with the Commonwealth? YES (1) NO (0)

Do you pull strings for high ranking Chinese Communist Government officials who ASIO has directly warned you about interacting with for fear of corrupting our democracy, but still have lunch with them in a private room in Sydney’s Chinatown after they’ve paid a dodgy lawyer $20,000 to organise the meeting? YES (1) NO (0)

Add up your tally to find out your results. If you got:

0 – You are pretty bright

2 – You need help with your taxes

4 – There’s someone out there for you mate

5 – Bit behind the eight ball

7 – How close do you stand to the microwave? 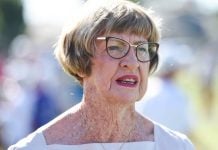