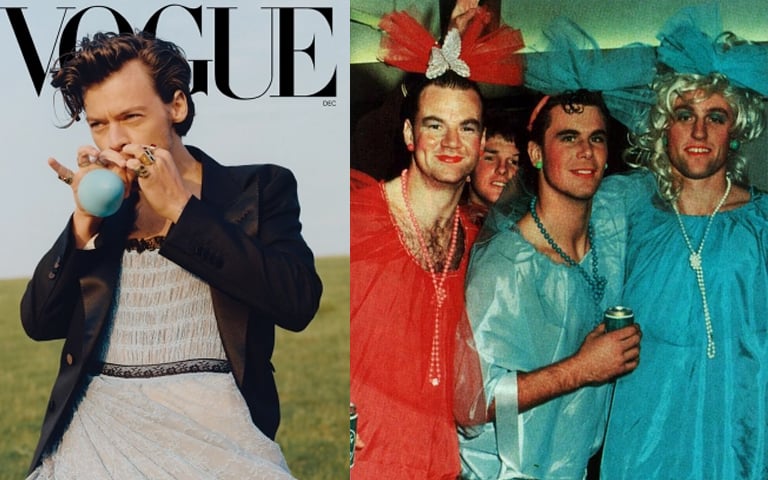 Fashion publication US Vogue have made history this week by featuring British pop singer Harry Styles as its first-ever male cover star.

He is also apparently the first ever white male to look like he’s comfortable wearing a dress, according to woke Twitter.

The cover immediately sparked emotive online and media conversations around masculinity and gender, as photos were pinballed around the world of Styles wearing the type of dress your nan would wear if it wasn’t designed by Gucci.

The headlines surrounding this shoot has also triggered the identity frustrations of conservative commentators, who are outraged that a young bloke who came to fame in an English pop boy band was so comfortable with his femininity.

The image is purported to be touching on a growing exploration of gender-fluidity and non-binary dressing amongst millennials and Gen-Z shoppers, but is really just a photo of a very rich kid wearing a dress.

Shapiro, a conservative pundit, appeared to agree with Owens’ attacks. He shared her tweet and added: “Anyone who pretends this is not a referendum on masculinity for men to don floofy dresses is treating you like a full-on idiot.”

These comments fit in with how contested and divisive debates around gender expression have become in western media, as both prudes and intersectionalists act like they’ve never seen anything like this before.

The instant news hysteria from both the adoring Idpol left and the terrified conservatives points to a growing media class that has no experiences with a footy club Mad Monday.

It has become evident that even those who are manically congratulating Harry Styles for his glass ceiling shattering fashion choices clearly have never before been forced to drink for three days straight alongside an entire forward pack of blokey blokes wearing cute dresses, some of who really like doing it.

A recent report by the CSIRO has found that 90% of Australian males have at one point in their life relished at the opportunity to wear fishnet stockings and sometimes even lipstick, regardless of their sexuality or gender identity.

In response to the Vogue front page, there are also now hundreds of thousands of cauliflower-eared men around Australia who feel jilted by seeing Harry Styles receive praise for fashion choices that they helped normalise while on benders.

With Mad Mondays, birthdays, 40ths and toga night’s around the country constantly featuring classic examples of usually tough and blokey men wearing high heels, The Betoota Advocate has been commissioned to ask why this happens. READ OUR POLL RESULTS HERE: