[dropcap]I[/dropcap]T’S OFFICIAL. Australia has had more changes in leadership than the archipelago nation of Fiji, known for it’s beautiful beaches and bloodless coups. But after the recent developments to come out of Canberra, our nation has pipped Fiji to take out the top spot.

A coup, known simply in Australia as a leadership spill, is the sudden and dubiously legal seizure of a state, usually instigated by a small group of the existing government establishment to depose the established prime minister and replace him/her with a new one. A coup d’état is considered successful when the usurpers establish their dominance. If a coup fails, political embarrassment and retirement may ensue.

Speaking today from his military compound in Suva, Brigadier Serevi Kapaiwai of the Fijian Army said that he’s unhappy to lose the title of “world’s most volatile democracy”.

“I’ve been toying with the idea of overthrowing the government for years now,” said Brigadier Kapaiwai. “Perhaps now’s the time. I can topple this incompetent peanut running the country now as well as reclaim Fiji’s status as the coup d’etat capital of the world.”

In the past, Australia has been quick to lend a condescending hand to the Fijian people in their time of need, which is usually during a coup. The last time the country bloodlessly overthrew their government in 2006, Australia sent a warship and special forces to make sure nobody got shot.

In response to Brigadier Kapaiwai’s inflammatory remarks, His Excellency General The Honourable Sir Peter Cosgrove AK, MC said that should the rouge Fijian brigadier consider overthrowing his government, he should be prepared to face the consequences.

“The Australian military and I aren’t going to stand idly by while the people of Fiji suffer,” said His Excellency General The Honourable Sir Peter Cosgrove AK, MC. “Should he launch a coup, he can expect that we’ll depose Turnbull just to keep in front.” 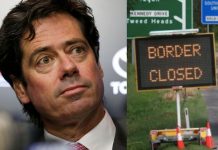