“That places would be swimming with the Pangolin’s Revenge,” he said.

“If you want in there, you’d be coughing before you even got to park your arse in a poang.”

For weeks now, Jennifer Porilley was wanted a Poang – which is one of those recliners from IKEA that looks like it should break when you sit in it but it doesn’t, you know the one.

But she wants to try one out before she buys it, making David Pooley’s advice to simply buy the “fucking thing” online redundant.

Each time they pair drive past the Swedish tax-dodger, Jennifer says they should pull in for a look.

“It’d be safer licking every doorknob in Melbourne. All that recirculated air. Honest to God, Jen. We’d be safer crashing this fucking Celica into a powerpole. We’d have a better chance or survival,”

“Look, babe. It’s not like I don’t want to go there. I want you to park your arse in a Poang just as much as you do. Hell, I’ll even buy the fucking thing. But we can’t go in there right now, it’s not safe. I’m only trying to look out for us. Tell you what, we’ll go there in the new year once all this blows over.”

Jennifer just raised her eyebrows and decided in her head to just go back tomorrow and buy the fucking thing on the joint account. 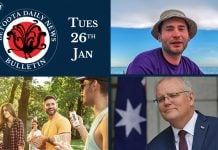