A recent report carried out by Australia’s peak scientific body, the CSIRO, has found a juicy – and in hindsight, obvious – correlation between Piaggio MP3’s and breastfeeding.

For those not educated in the field of 3-wheeled scooters, the Piaggio MP3 is the motorised scooter that has two front wheels and one rear wheel – the ones you see in the street and laugh at.

The report went into great detail around the types of people who might purchase a Piaggio, where they’re most popular and why someone would think it’s a good idea.

While the entire report is full of insightful facts, the one that stood out the most was the type of person who’s likely to ride one.

After conducting a 2-year-long study, researchers at the CSIRO were able to conclusively reveal that adults who ride Piaggio MP3’s were all breastfed well into kindergarten.

According to Derek Henderson, the researcher behind the study, people who drank breast milk for more than 6 years developed ‘Training Wheel Syndrome’, a phenomenon that sees these people apply extra support to everything they do.

“The Piaggio is just one example, they also have extra heels on stilettos, they swim laps with life jackets on, the list goes on” explains Derek. 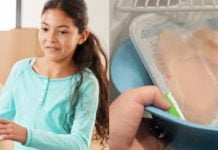