As the Omicron variant ravages through Australian households and workplaces just days out from Christmas, the Prime Minister is doing his best to lead the nation.

His number one priority now is assuring Aussie voters that their leader is a normal bloke, who spends his down time just like they do, by posing in front of the Christmas tree in a $3000 suit.

The financial misery and loneliness caused by this pandemic looks like it will be following us with great momentum into 2022, so it is upon our Prime Minister to instil hope in the people – just like he did during the 2019 bushfires after he came back from Hawaii and took a bunch of photos with the Australian test cricket side.

With the Federal Government refusing to shell out to provide free rapid antigen tests for essential workers, and hundreds of thousands of Australians missing work and Christmas after testing positive of being listed as close contacts – Scotty From Marketing knows that this year’s Christmas photos have to be Oscar-worthy.

That’s why he’s flown in one of the greatest living Hollywood directors of all time, Martin Scorsese.

Based out of Los Angeles, Scorsese is an American film director, producer, screenwriter, and actor. Responsible for epic films like Taxi Driver, Goodfellas, Shutter Island and The Departed – He is widely regarded as one of the greatest and most influential directors in film history.

With a track record like that, there is no surprise that Scotty From Marketing has flown the 79-year-old out from LA to Kirribilli to direct the Morrison family Christmas photos.

Scorsese, having never visited Sydney during an Australian summer, was reportedly very excited to take the job – especially after he learnt that he would be getting paid $10 million tax-payer dollars for the half an hour shoot.

With the cameras all set up and ready to paint the Prime Minister of Australia as just another everyday, mildly religious, good bloke who cares about people – Scorsese gets to work.

”Am I De Niro or Leo haha. Nah just kidding”

“But seriously, should I even bother having the family in this shot, or should it just be me, staring at the barrel, as Australia’s dad”

”Can you make me look like someone that Australians would love?” 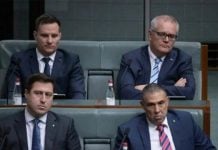 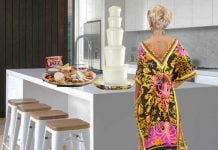