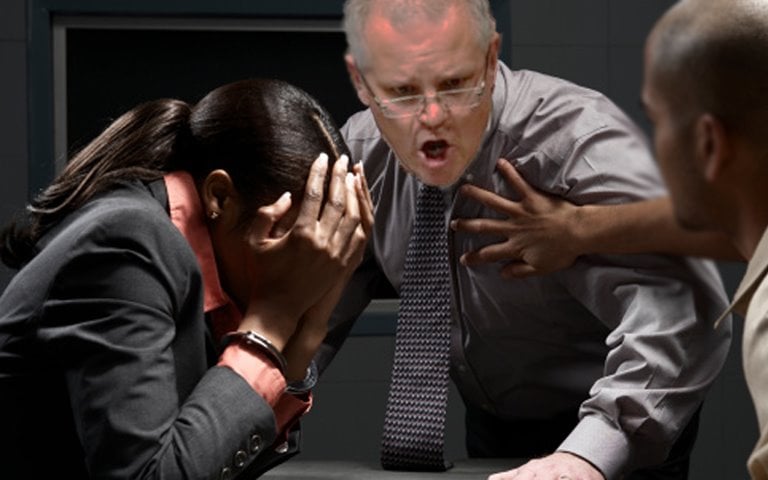 Swinging around a copy of the Yellow Pages they had incase Google really did fuck off out of Australia, Prime Minister Scott Morrison and Treasurer Josh Frydenberg are practising their Good Cop/Bad Cop routine ahead of negotiations with Facebook CEO Mark Zuckerberg.

In trying to negotiate a deal so that billionaire Rupert Murdoch could get a little wealthier, ScoMo and JoFry have ended up slightly baffled that Facebook blocked access to news content for Australian users exactly as they said they would.

“They have done exactly what they promised to do,” stated Mr Morrison, unable to disguise the utter lack of understanding in his tone.

Treasurer Frydenberg has made no secret of his ongoing negotiations with Zuckerberg, in much the same fashion as a millennial bringing up their close friendship with someone who has a big Insta following.

But Zuck better wipe that uncanny smile off his face in preparation to be double teamed by the fiercest negotiation tactics Australia has seen since Tony Abbott shared his daydream about shirt-fronting Putin.

After spending $2.5 million on strategy consultations with an agency run by a former Liberal frontbencher, the PM and Treasurer are pleased to announce they will be going in hard with a classic Good Cop/Bad Cop routine.

Popularised by police dramas, the Good Cop/Bad Cop routine involves a team of two interrogators taking on different personas, working together to build trust and fear in the interviewee, respectively.

At the time of writing, it appears the negotiations with FaceBook have not gone ahead as the PM and Treasurer cannot agree on who gets to be the Bad Cop.

“I can make myself look big and scary like this,” stated Mr Morrison while standing on his toes and raising his arms above his head until they nearly touched the ceiling of the interrogation room.

“You should be the Good Cop, people like you! Besides, I really wanna punch a wall. Give us a go Joe come on!”

However, Treasurer Frydenberg said he is the Bad Cop and won’t back down from an opportunity to knock an overhead light around while threatening to inflict cigarette burns.

“No one will believe you’re the bad cop, you’re the Prime Minister, everybody loves you, Rupert made sure of it, that’s why we’re in this mess. I’ve got the cap gun, I’m the bad cop and that’s it.”