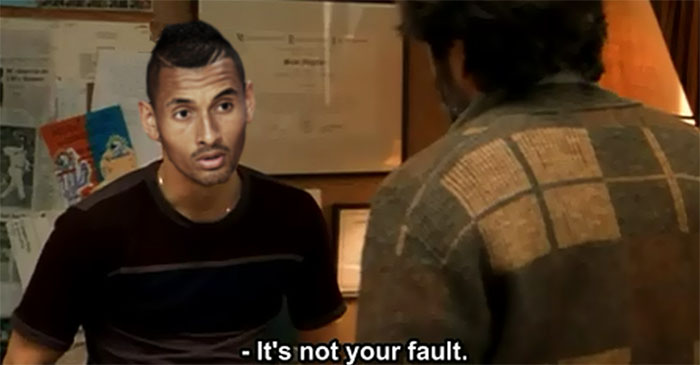 AUSTRALIAN TENNIS PRODIGY NICK Kyrgios has bowed out of the Shanghai Masters overnight and into a firestorm of malicious accusations, with some commentators accusing him of “tanking”.

The 21-year-old capitulated in 48 minutes, 6-3 6-1 in the second round at the hands of 110th-ranked qualifier Mischa Zverev.

Following the shock defeat, the Canberra boy went to see one of the many AIS sports psychologists who accompany our sports stars around the world, providing them with much needed professional and emotional support.

Lead counsellor Gilbert Goochman outlined what the sensation must be feeling at the moment, with the might of the world’s press coming down on the youngster like a Philippoussis backhand.

“I wanted to make it clear to Nick that it wasn’t his fault,” said Goochman.

“He said he knew, but I said it again. Then he grabbed my collar and said: ‘Don’t fuck with me, man. Not you!’ and I repeated it again,”

“He broke down on my shoulder, saying that he thought he was back on top of after that lion-hearted win last week in the Japanese Open last week. But after putting in such an uncharacteristically poor performance last night, he feels like he’s really let himself down.” explained Goochman.

After spending some much needed time crying in Mr Goochman’s office, Kyrgios left to spend some time with some of the other under-siege Australian tennis stars.

Figuring that he needed to spend some time off soul-searching, he reported told close pal and mentor Bernard Tomic that he’s going to see about something, before driving off into the sunset.