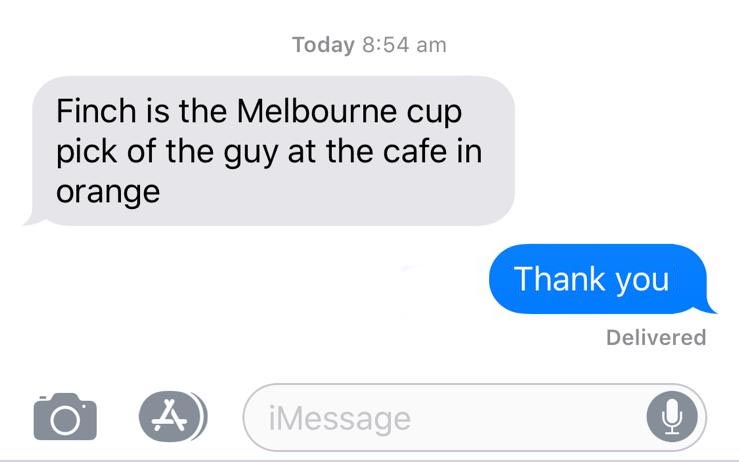 A local man’s mate sent him a message this morning that suggested betting on the favourite in the Melbourne Cup is the key to winning.

Chive Bergamot, a close personal friend of French Quater man Carlos Uno, texted the race tip over after being told by a cafe owner in the New South Wales cold country that Finch, a quick horse, was the horse that was going to be quickest on the track come 3pm.

Friends of Chive say she’s not one to withhold critical information such as the inside word on who’s going to win the race that stops the unwashed and unwoke, which means Carlos wasn’t the only one in Chive’s contact list to get the secret tip.

Carlos isn’t the only resident of this bohemian hellhole on the fringe of the Simpson Desert that’s in daily contact with young Chive.

Local woman Olana Reers told The Advocate a short time ago that she and the rest of the members of a group chat she’s in with Chive received the same tip.

Our reporter attempted to locate Ms Bergamot for comment but were told she’s currently in the North Betoota Watchhouse for pushing a policeman into a bush down at the racetrack.