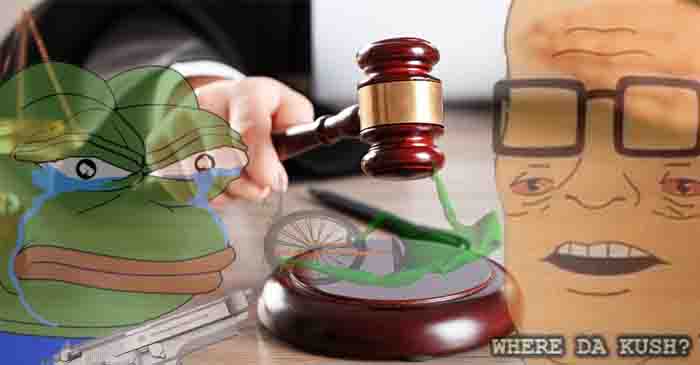 A SUNSHINE COAST JUDGE IS under police protection this weekend after explosive scenes at the Maroochydore Magistrates Court on Friday afternoon as a local man lost his memes in a divorce settlement.

Marcus Brett Peanut (48) was found in contempt of court after threatening to slit the throat of Justice Michael Bryce as he handed down his judgement that saw the out of work substitute teacher lose his two children, memes and three-bedroom home in Buderim to ex-wife Chrysty Port-Royal (27).

Peanut is also expected to face further charges of assaulting court officers and threatening to harm a judge.

One bailiff received minor injuries as Peanut lashed out as he was being dragged from the court. His lawyer is also expected to file assault charges against the man as after the verdict was read out, Peanut allegedly threw a ‘judo-style’ chop to the throat of his legal council for failing to protect his memes.

Speaking to a court reporter earlier in the day, Mr Peanut felt confident ahead of his final day in court.

“I think the judge will understand the amount of effort I put into my memes when he delivers his verdict,” explained the 48-year-old.

“I mean, Chrysty never puts in any effort when she makes her memes.” he said. She just goes to

“She just goes to imgflip and puts text over Scumbag Steve or something lame as hell like that.”

“I, on the other hand, make all of mine from scratch – like a Jamie Oliver vinegarette. I introduced her to the world of dank memes and I also taught her how to deep fry a meme,”

“There’s no way she can take pipe from half of Buderim on my flash Nick Scali sofa behind my back and expect to keep anything in the divorce. I mean, there’s no way. She’s literally brought nothing to this marriage except for chlamydia. I’ve got this one in the bag.”

Peanut failed to make bail and is currently being held on remand awaiting trial at a later date.