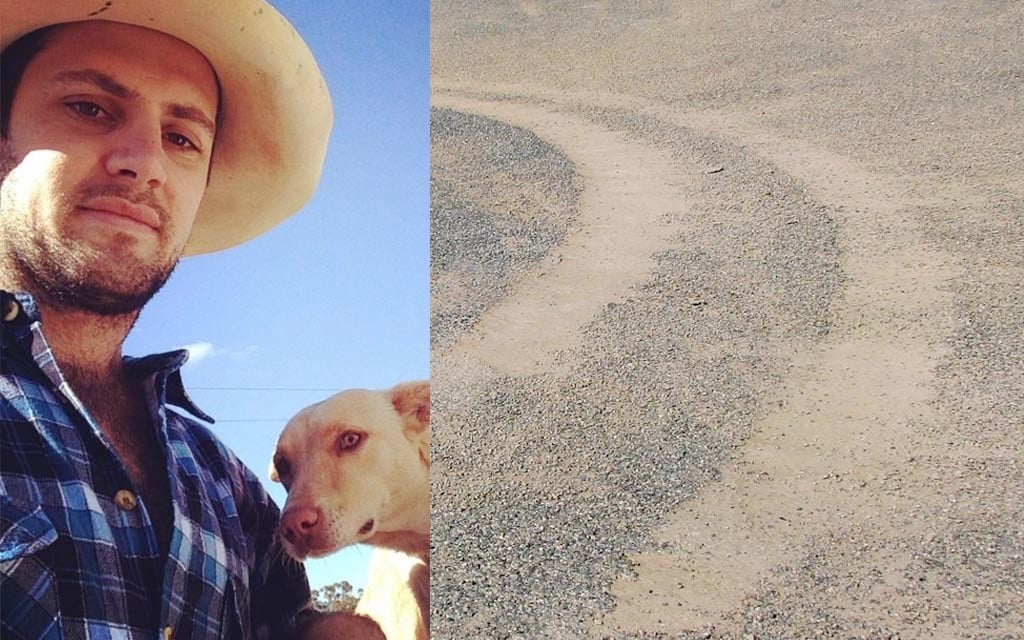 A happy-go-lucky dirt farmer’s son on the Betoota City Limits spent the morning hooning around the top paddocks, leaving what he assumes were invisible tracks in his wake.

The first being a water run in the top blocks. Blake took a trough brush with him in case he found one that needed a scrub.

As it’s winter time, that was quite unlikely but the chipper youngster told our reporter a short time ago that he didn’t want to be unprepared.

“I knew that job would take about an hour or so,” he told The Advocate via telephone this afternoon.

“I cleaned all those troughs halfway through autumn and it’s been pretty cold so the changes of a trough being filthy were slim. Anyway, that’s what Dad told me to do so I did it.”

However, Blake said that once he got up in the hills, he decided to put his Dad’s 8-year-old Toyota Hilux into 2H and send it.

“It’s not Dad was watching me. He’ll never know. He probably wouldn’t be that pissed off. Well, maybe. Being hard on gear really gets him going. Like once I left a pair of Crescents out in the rain for a few weeks and when he found them, he threw at me like he was actually trying to hit me. He could’ve killed me if he hit me in the temple!”

“Anyway, so that was my morning.”

After young Blake hung up and went back to shooting crested pigeons off the telephone wire down the side of the house, our reporter rung the house phone again to speak with his old man, Darcy.

Eleven rings later and Darcy picks up the phone just as he returned back from the top paddocks himself.

He told The Advocate that he went to check if Blake had done his jobs properly, as any self-respecting primary producer does when he gives a child a job to do.

“That was the first red flag because I’d left it in 4H. I thought to myself, ‘Hmmmm. I think somebody’s been for a bit of a hoon in my work ute,’ so I went to investigate,”

“And lo and behold, Errol, upon making it up to the top paddocks, I saw some hoon tracks. A few donuts and a couple power slides. That little bastard, God damn! Does he think I’m fucking blind? Jesus wept.”

Darcy then excused himself as he left to chase his son around the homestead with a cricket stump.