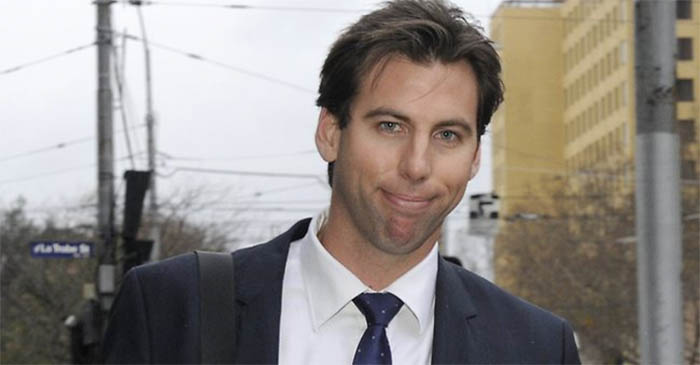 IN THE DAY AND AGE where everybody has a video camera in their pocket, former Olympic swimming champion Grant Hackett today said he was ready to put the whole ordeal behind him, stating that “he’s just happy nobody filmed him” when he gave some bloke a nipple gripple onboard a Virgin flight the other day.

It’s alleged that Hackett and the man seated in front of him had a small argument, which resulted in the 35-year-old giving the man a nipple gripple – a type of schoolboy torture whereby one’s nipples are violently tugged and twisted, causing a significant amount of pain to the victim.

“It was like having a weight taken off my chest when I found out nobody filmed that little episode,” said Hackett.

“As most of you are aware, being filmed doing something silly is way worse than hearing it through hearsay. I mean, look what trying to kiss a lesbian and root a dog can do for your career? It’s bullshit,”

“What happened on that plane is nobody’s business except for me, the bloke who had nipples gripped and the Australian Federal Police. If you’re not any one of those people, then can jam it.” he said.

Details of what happened inside the cabin of the Melbourne-bound aircraft are unclear at the moment, but what’s for certain is that it won’t have a detrimental effect on Grant’s career.

Speaking this morning to a crowd of vaguely interested journalists, Collingwood CEO Gary Pert said nothing really happened on the flight and what did happen doesn’t really warrant him, or the other journalists present in the room to get out of bed this morning.

“Yeah look boys and girls, it’s a bit of a non-event. Grant and I had a nudge the night before and this joker in front of us was being a bit of a pelican so Hacko just played with his nipples for a bit then went to sleep,” he said.

“If you don’t have any other questions, I’ll be having a lie down in the office. I’m buggered.”