The leaders of the Coalition government this morning secured the sale of the last 20-pack of water left in South West Queensland.

A foreign-owned cotton operation purchased the water for $8.49 – a figure that represents a large discount when compared to what the price of water has been historically in the region.

Prime Minister Scott Morrison joined Michael McCormack and David Littleproud from the Nationals in Stanthorpe today to make the announcement.

A representative from the cotton company was also present but didn’t say anything and the Prime Minister forgot to introduce him.

The coldest town in Queensland ran dry earlier this month and now relies entirely on water to be trucked in.

“This is a great day for South West Queensland,” said the Prime Minister.

Mr Littleproud nodded at nobody in particular while McCormack smiled in the same manner.

“Water is the key to life, it’s key to jobs out here in western Queensland. This water represents just a tiny amount in what’s a mighty river system. From up in these parts all the way down to Wentworth. How good is that?”

“Cotton has always been grown in this country and it’s a great industry. Great Australians, they are.”

Just as a reporter from the ABC raised her hand to ask a question, Mr McCormack interjected saying taking water out of the upper reaches of the Darling River system as no bearing on how much water makes it to the Murray.

“It all comes out of the Marshes and Barwon,” he said.

“Tell your mates in Southbank that’s what the story is. I’m sick of it!”

Mr Morrison pursed his lips then looked at Littleproud and nodded.

Littleproud then took the 20-pack of bottled water from the Prime Minister’s arms and handed it to the moustached foreign cotton grower.

“Great doing business with you, joog.” 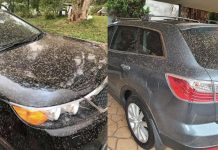 Eww! Sydney 4WD Drive Owners Wake Up To Their Cars Looking They’ve Been Off Road Or Something