NSW Premier Gladys Berejiklian has raised the bat at today’s 11am press conference, after finally cracking the 4 digits.

New South Wales has recorded 1029 new local cases up to 8pm last night. It is the first time daily cases numbers have exceeded the 1000 mark.

“C’mon!!!” cried Hot Mess Gladys, as she went on to announce the non-terrifying numbers of record breaking testing a jab rates.

“They didn’t think we could do it. But we have”

“And to give you all a little treat. I’ve decided what your one special thing is”

Those living within the the LGAs of concern can do the same, but only for an hour.

When the state reaches 70 per cent full vaccination, “a range of family, industry, community and economic restrictions” will be lifted for people who are vaccinated.

While the spirits were weirdly high at today’s press conference, the Premier did want to point out that she has grave concerns for the most vulnerable regional communities at the centre of the far-west outbreak.

“I know obviously Scotty didn’t send enough jabs out your way. And I know there has been a lot of mixed messaging about these jabs. But please… And I mean this”

“PROTECT NAN AT ALL COST”

Gladys Berejiklian said western NSW is the area of most concern and the regional lockdown will be extended until at least September 10. 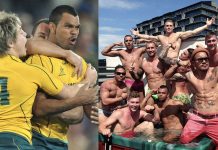