In some heartwarming news from Sydney, it appears that faith in humanity has been completely restored as officials moved swiftly to close down the harbour bridge for an adorable gosling.

Horrified onlookers state that they saw the scared gosling attempt to cross the bridge yesterday morning, before it was seen freezing in the middle of a busy lane and letting out some terrified squawks as it stared down an oncoming truck.

But luckily for the gosling, roadworkers were quick to block all seven lanes to ensure its safety – a move that has admittedly been called a little ‘overzealous’, by some.

“Yeah I thought it was a bit of an overkill, it’s just a bloody gosling”, remarks a local lorry driver, “didn’t that other bird get 15 months in jail for blocking just one lane?”

“Mind you, that was a pigeon. People to be a little more lenient towards goslings.”

Another onlooker, a mum of two who was on her way to work, says she completely understands why the shutdown was needed.

“He’s just so cuuuute, I’d hate to see him squashed”, she says, “I would have ran into traffic myself.” 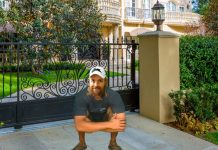