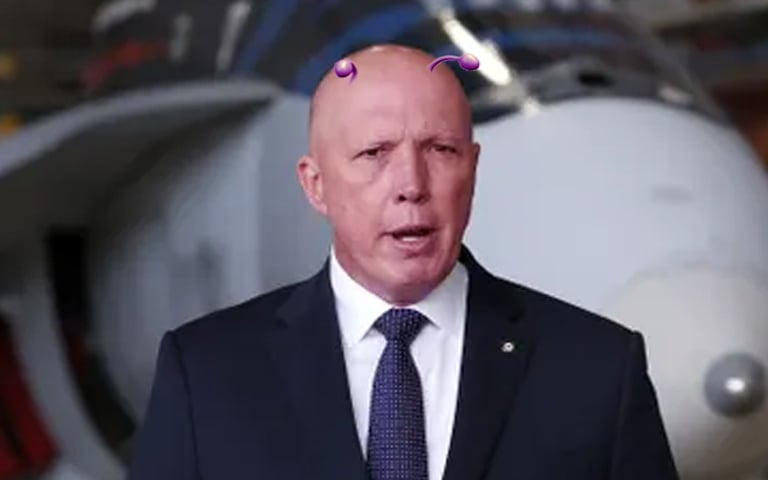 In some stranger news, Minister of Defence Peter Dutton has today announced his plans for a space command under the guise of protecting Australians from countries that may take advantage of a new realm of conflict. This is said to have been prompted by Russia and China’s latest move to start playing with hypersonic weapons, which operate at five times the speed of sound and are pipped to be ‘unstoppable’ – so fast, they’re impossible to see on radar.

Having constantly harped on about Australia being attacked from every possible angle, whether it be from the sea or through Wi-fi, it comes as no surprise that Dutton has turned to air defence, considering there’s no country that can dig their way into Australia. However, an inside source has revealed to The Advocate that Dutton actually has another reason why he’s so keen on starting a defence force, and that it has nothing to do with the safety of our country.

Sending encrypted messages which appear to have been audibly distorted, the secret messenger states that Dutton (who’s real name is Qualazulu) has actually been trying to get back to his home planet for two decades now, having grown noticeably weaker and more ashen the longer he’s denied his prime food source, which the voice says says is a similar delicacy to prawns.

Our reporter learns that Dutton is actually from a planet known as ‘Flamborg’, where he was a bit of a loser, especially after a certain tentacle incident that was aired on their version of the internet. Wanting to redeem himself, Dutton had stolen a small spaceship and crashed it into earth, with plans of becoming a powerful and prominent figure and causing as much havoc and grief as possible.

This need for validation is also said to be why Dutton is so hellbent on stopping immigration, as he seems to have misunderstood the term ‘illegal aliens’ and doesn’t want anyone stealing his thunder.

However, now that he’s accomplished everything he needed to, Dutton has unfortunately discovered that the spaceship used to fly to earth all those years ago has now succumbed to the elements, leaving him no option but to find a new way of returning home – a venture he hopes results in him finally being acknowledged by his father, Z’rillius.