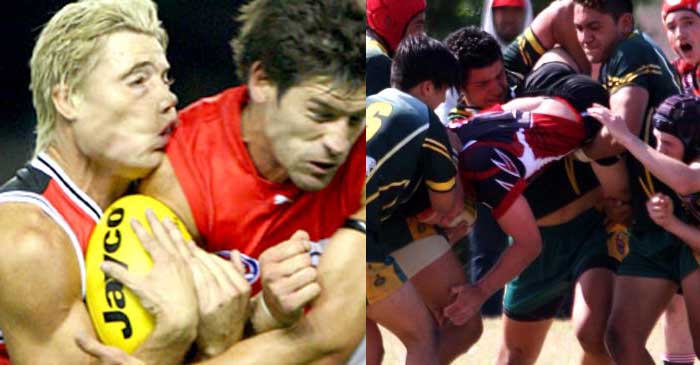 Australia’s peak scientific body concluded their investigation into which bush sporting was the toughest earlier this month, leaving many questioning the study’s findings.

At a press conference this morning, a spokesman from the CSIRO said that after a decade-long taxpayer-funded investigation, they were able to prove that AFL had the toughest bush competition, followed by rugby league, then cricket, then netball and taking up the last spot was rugby union.

“But we found five distinct and profound moments that prove that AFL is by far the harder, faster and ultimately more entertaining of the rural sporting pursuits,”

“It didn’t take us too long to conclude that rugby union is for soft boys who should really be playing soccer if it wasn’t so heavily frowned upon in regional areas. But yeah, we had a set criteria that we applied to each sport and Victorian Rules Football came out on top.”

When asked by a Melbourne football journalist what tipped the game they play in lesser parts of Australia over the line, Mr Plainsman explained that AFL has its own channel, FOX Footy – and has had one for a umber of years, while rugby league had only launched their dedicated channel this year.

However, he distributed a list to reporters of the top 5 moments that he and his team decided definitively answered their questions.

“It combines three great aspects that we were looking for during our investigation,” said Plainsman.

4. Warrnambool’s Jonathon Brown gets hit by a car and breaks the car

“They don’t make them like they used to,” said Plainsman.

“And I’m not talking about cars.”

“Only a Broadford boy could take on a whole football team and come out on top,” he said.

“And completely sober as well, which makes it less impressive but worthy of third place none-the-less.”

2. Matthew Scarlett of Geelong switches Hayden Ballantyne off like a frozen laptop

“He did what every young boy in Victoria dreams of doing,” said Plainsman.

“Not that we at the CSIRO would ever condone an act of violence, but we’re assuming Ballantyne flopped and it’s Ballantyne.

1. Brendan Fevola kicks eight goals and gets Carlton over the line.

“When you’re getting hammered by the Bombers and need someone to step up,” said Plainsman.

“It’s not going to be a banker’s boy from Fitzroy, it’ll be a freight train of a human from the fringe.”