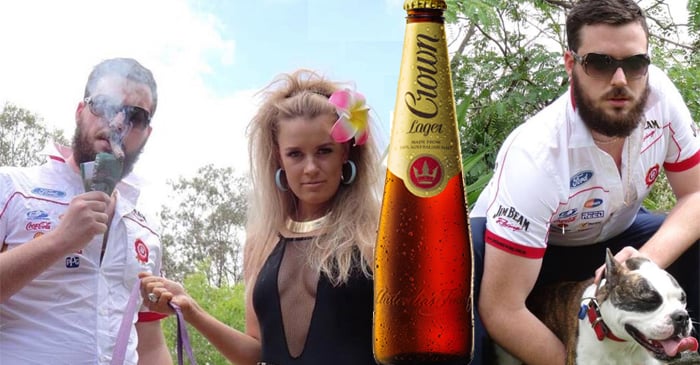 The company’s CEO, Chris Stewart, said that the move came after a general consensus from franchisees who pointed out that Crown Lager was mostly bought as gifts by people who do not drink beer.

However, the nation’s Crown Lager enthusiasts have rushed to the defence of their choice to drink ‘top-shelf’ Australian beer, and have criticised Dan Murphy’s move to relocate the beer to the ‘low breed’ aisle.

Gold Coast based FIFO worker Ken Archer (34) and his fiancé, Sharmayne Saunders (27) have spoken to The Betoota Advocate about their brand loyalty to the ‘classy’ Australian beer.

“Anyone who runs down Crownies are just bogans with no class,” says Sharmayne.

After recently relocated their family of four to the ‘Goldie’ – from their hometown of Redcliffe, in Brisbane’s North – Mr Archer and Ms Saunders say that when it comes to ‘having a few’ – they’d much prefer a Crown Lager over a Victoria Bitter or XXXX.

“Seriously, it’s a decent beer. It’s hard to find a decent tasting beer like it,” says Archer, while sitting on his brand new Yamaha Jet Ski in the canal opposite their eight-bedroom rendered brick waterfront mansion.

“Mind you, Shar usually gets stuck into the double blacks if she really wants to do a good job on herself. Other than that, its Crownies all the way,”

Our interview was cut short by Sharmayne announcing lunch for the family, a satay-chicken lasagne that she had stumbled across in the Women’s Day recipe of the week.

“Lunch is on. That’s about all you’ll get from us today,” said Sharmayne.

“Now fuck off, woulda ya”