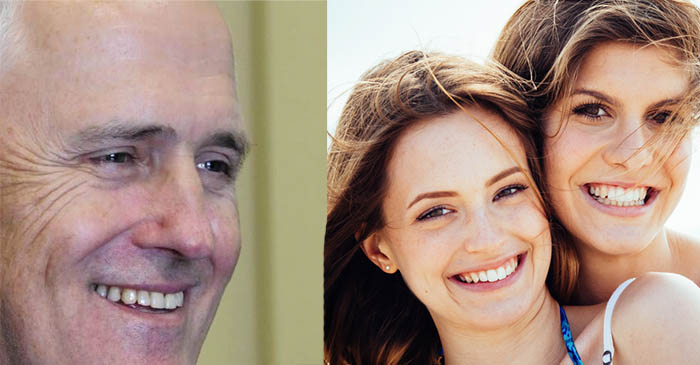 IF YOU’RE A HOT GAY WOMAN, then bite your tongue and vote for the Coalition government this July, because they might’ve found some middle ground on the polarising issue of gay marriage.

After a series of high-level talks between senior members of the Liberal and National Party, a policy agreement was established, which might allow some gay women to get married – as along as they pass a set of stringent criteria.

Details of that criteria are yet to be released.

Though he was visibly uncomfortable being there, PM Malcolm Turnbull arrived at ‘that end’ of Oxford Street in Darlinghurst this morning to share the good news.

“I think the biggest thing to take away from today’s announcement is that we got the National Party to agree to gay marriage, to a certain extent,” said the Member for Wentworth.

“But there’s still a lot of ground left to cover, at least we’re not lying to you. We’re considering it. It might happen. Don’t let Bill [Shorten] tell you it will, because he’ll only let you down again,”

“As I was saying, a vote for the Coalition in July is a vote for hot lesbian gay marriage.”

Lashing out at the prime minister’s comments, opposition leader Bill Shorten said he would definitely try to get gay marriage on the table, he just has to ask the unions if they’ll support it first.

“I’m not in the business of biting the hand that feeds me,” said Shorten.

“They’ll be gay marriage in this country if my bosses support it. I can promise that 100%,”

Lesbian marriages may happen as soon as July 20, should the incumbent government be elected.