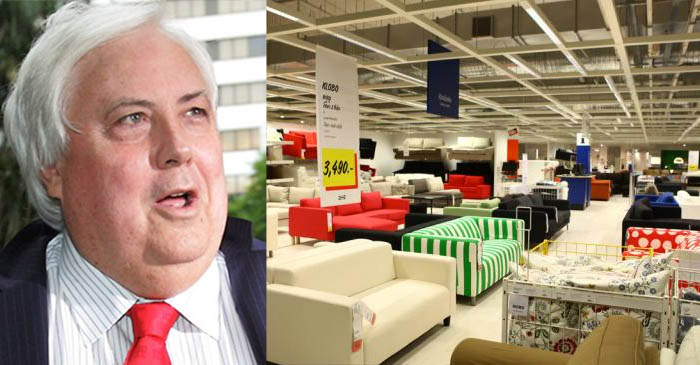 THE LOGAN IKEA SUPERSTORE is in lockdown after federal politician Clive Palmer wandered off from his minders, sparking a desperate search by workers and his own staff.

Police and emergency crews have arrived and ushered shoppers out while they began cordoning off the area.

Palmer’s staff are concerned he may encounter a member while unsupervised. The rise and popularity of smartphones mean that Clive could only be moments away from another embarrassing gaffe.

“We’re working with IKEA staff and the authorities to hopefully find a happy ending to this mess,” said one junior Palmer United Party staffer.

“There’s only been a handful of situations when Clive has been left unsupervised. The first time he got separated from the group, he got on a bus and we didn’t see or hear from him in nine days,”

“My back was turned for only a minute.”

In 2011, Palmer was filmed by a member of the public eating a hard-boiled egg through the shell. His team went into damage control, saying that it’s perfectly normal to do that.

Another incident occurred when Clive was caught talking to Joe Hockey’s dog, Noodle. It’s alleged by former Hockey staffers that Palmer was asking Noodle if he’d overheard anything in the lead up to last year’s budget.

Again, the 61-year-old’s staff leapt to his defence, with his media advisor going on breakfast radio to defend his actions.

“What Clive is to Australian politics, Mew is to the Pokemon world,” said his media advisor. “He’s super-rare and sought after, but doesn’t really do anything harmful.” and

“When I first started working for Clive, I used to do triathlons. Now I’ve lost my hair and I drink seven cups of coffee a day and wonder how I ended up here.”