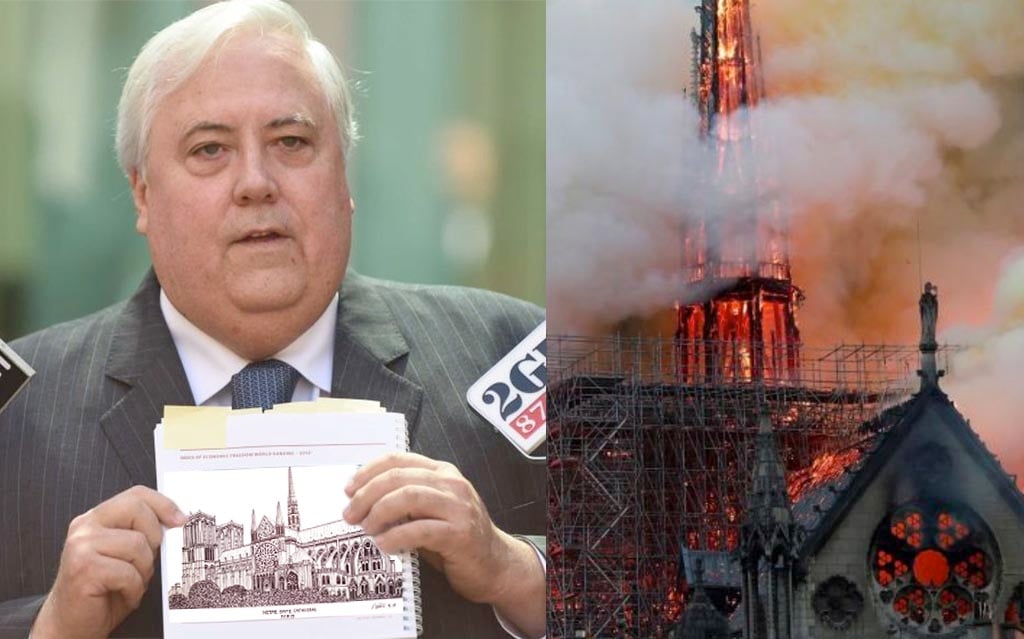 Locally-unpopular populist Clive Palmer, who is gunning for a seat in the lower house at this year’s election, has responded to the ongoing disaster in Paris overnight that’s seen one of the world’s most iconic places of worship partially destroyed by fire.

The Notre Dame Cathedral in the French capital is hundreds of years old and is a favourite among the many millions of tourists that flock to Paris each year.

The Republic’s president, Emmanuel Macron, has called for an international effort to rebuild the cathedral.

It’s a call that Clive Palmer has answered.

This morning on the Sunshine Coast, Palmer called a press conference out the front of his Coolum property where he outlined how he plans to help.

“Should I be elected to office, I promise to a full-size replica of the Notre Dame church here in Coolum,” he said.

“The project will cost about half a billion dollars. Some will be mine and some will be the taxpayer’s. It will be a bipartisan effort to rebuild this beautiful building. Or should I say, ‘biparisian’?”

A member of the local media cough-laughed.

“It will be built alongside my dinosaurs and it’ll create jobs and attract tourism to the area. It’s a small part of my plan for Queensland and Australia should they choose to so graciously elect me to parliament again.”

A number of reporters asked him how this would affect his intent to pay the Queensland Nickel workers he owes millions.

Clive also had an answer to that.

“We’re in talks to rehire the Queensland Nickel staff here at Notre Dame Coolum. Others will be hired as sailors on my Titanic. I trust that answers your question!”

“But due to budget constraints, Quasimodo will have to be replaced by a raptor from my dino park. I hope it spurs on a new version of the classic Disney movie,”

Clive then shrugged and walked off without saying goodbye to anyone.