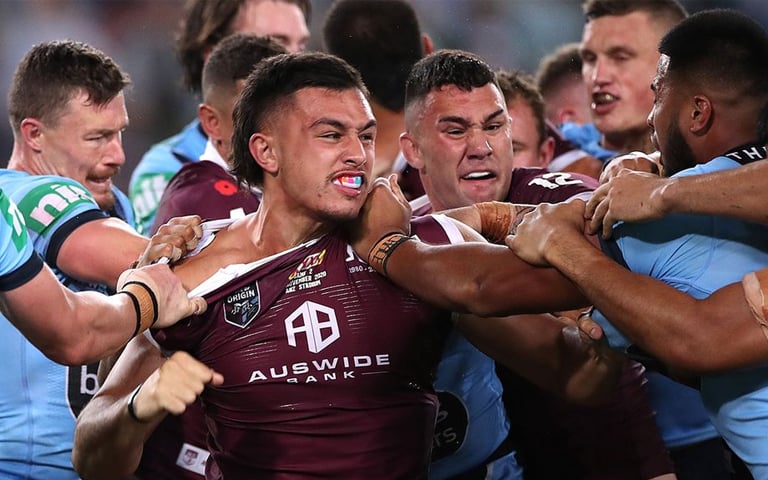 Fa’asuamaleaui, or Big Tino as he is known to the gun-shy commentators, has made a name for himself as a rising hard-man of the game.

Last night’s match provided those that did not already know Big Tino with some helpful insight into how this little blockie gets down when shit pops off at The Phoenix Hotel in his wild hometown 160km north of Brisbane.

The recently-signed Titans lock was shown the cheese midway through the second half in Game II last night, after he went full Gympie during a melee with his New South Wales rival Payne Haas.

The usos let them fly as the Blues were sealing the match at 28-4, after a push and shove eventually led to something that reminded us of the 1990s.

Both players were sent to the sin bin for 10 minutes after the pair had to be dragged off each other by teammates as several offshoot scuffles broke out.

With a torn Blue jersey hanging from him, Payne Haas was marched off first, not before antagonising the entire Maroons pack as he trotted to the sideline.

So fiery was the blue that the referee waited until Haas was well and truly in the tunnel before sending off Big Tino, to avoid a WWE-style backstage special with tables, ladders and chairs.

Queensland coach Wayne Bennett has since pointed the finger at the media as the cause for for the double sin-binning, opting to blame provocative headlines rather than Big Tino’s built-in Gympie instincts.

Those watching at home who were previously not familiar with Queensland’s country music capital, are now very aware.

MORE TO COME IN GAME III.