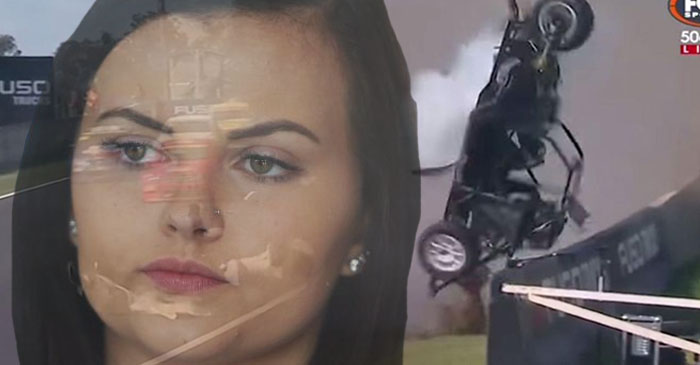 THE FIRST ALL-FEAMLE team to enter the Bathurst 1000 since 1998 has proven that when it comes to writing-off multi-million-dollar race cars, men are far better at it than women. Race fans from all over the country were let down by the female efforts, saying they didn’t come all this way to watch people drive around in circles.

Controversy still surrounds the Gracie crash on Forrest Elbow this afternoon, with the embattled 20-year-old saying mechanical fluid on the track was the cause of the minor accident. Compared to the enormous bingle from yesterday afternoon where Damien Flack crashed out at the end of Conrod Straight.

The cause of that accident turned out to be none other than his brother, who clipped Damien as their cars reached speed of nearly 300kph. His car rolled and flipped 12 times before coming to a stop and bursting into flames. He was cut out of the wreckage and flown to hospital, where he’s listed as being in a stable condition.

Renee Gracie emerged from her car visibly shaken, shorty after she was able to drive it back to the pits. Many race goers where left disappointed with her efforts though, with some saying that men are far, far better and providing entertaining high-speed crashes than women.

Ford racing fan Deverel Greck was left downhearted after Gracie was able to drive away from her crash today, saying that he would’ve felt he got his money’s worth if she was seriously injured like the blokes were.

“Maybe if she was driving in reverse [laughs] we would’ve had a more entertaining crash today,” said Greck. “Anybody on this mountain today who says they hate seeing crashes if full of shit. The only booked out campsite on the mountain is the end of Conrod and Forrest Elbow – the two crash hotspots. Riddle me that cunt.”