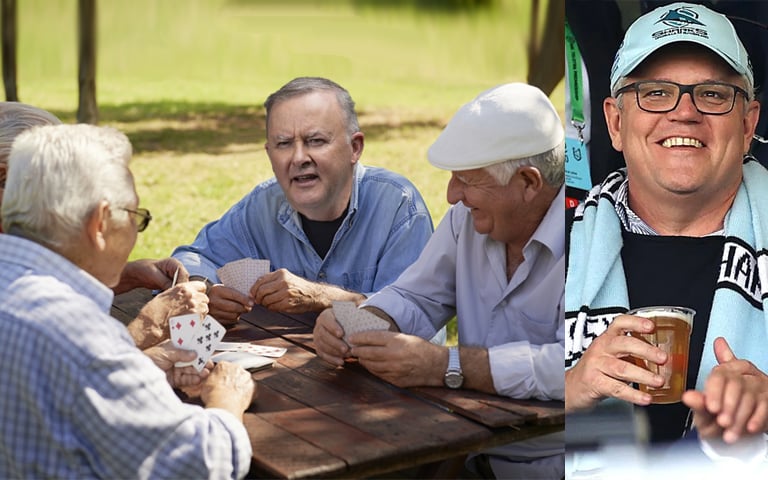 Opposition leader Anthony Albanese has today had to field questions from his constituents over the state of Federal politics.

But this isn’t the garden-variety correspondence with voters that most in MPs would be familiar with. This is a robust discussion over a game of cards. This is an Italian man from Camperdown being blasted by cranky Portuguese seniors who have to play cards outside now because of this bluddy virus.

And once again, Albo iss forced to provide commentary on the incompetence of his colleagues in Parliament House – during his fortnightly catch up with old vovos down at the Marrickville Hardcourt next to the Newtown Jets home ground of Henson Oval.

Namely, they want to know what the fuck is the go with his fucken mate that skippy dickhead from crona-ulla.

“What his problem?” asks one old small business owner, Martim, from Martim’s Hardware.

“He got no brain? He got no fucking balls thats for sure”

As the crowd of hot-blooded senior Mediterraneans roar with laughter, the Member for Grayndler is still expected to answer the question.

Unable to laugh it off, the interrogation begins again, as Albo is expected to speak on behalf of the Prime Minister as though he is a friend of his.

Santiago, from Santiago’s Wines, is not content with Albo’s answer. Hw continues the line of questioning.

Tomas, from Tomas school supplies, isn’t hearing a word of it.

Albo sighs as he realises these men are technically correct.

“You forgot your job?” asks Santiago.

“You sack him or pay me back”

All three men stare at Albanese for an entire minute in silence, before Santiago makes a crack about the Prime Minster’s weight by blowing his cheeks out and impersonating a husky gentleman with swinging arms.

The crowd erupts with laughter again, and returns to accusing each other of cheating in cards.

At time of press, Albo was changing the subject to last week’s proposed European Football Super League, in an effort to trigger an emotional meltdown not related to him or his chosen career as a member of the bluddy government who are worse than the bluddy banca!