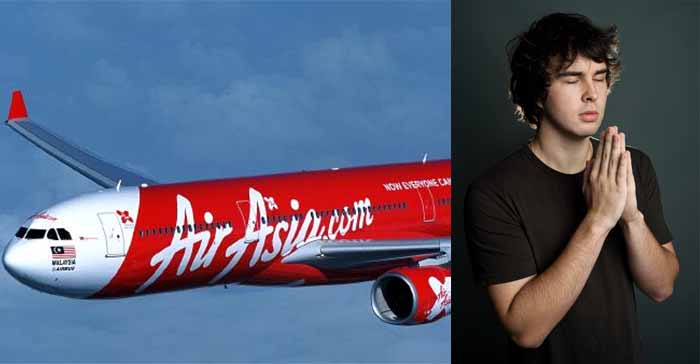 Embattled low-cost carrier AirAsia is now asking their passengers to say a prayer before boarding, rather than waiting until something goes wrong in the air.

According to airline industry insiders, the Malaysian-based carrier has outlined to staff that after an incident earlier this week where a Bali-bound jet was forced to return to Perth after experiencing a mid-air malfunction, they are to instruct passengers to pray for a safe journey prior to boarding the aircraft.

Controversially, passengers who identify as non-religeous will be required to pray regardless.

“Rather than waiting for something to happen, such as what happened over the weekend, AirAsia wants their passengers to make peace with their God before getting on the plane,”

“To make sure God is happy with everyone on the plane, even those who aren’t religious will be forced to pray, just in case.”

The news comes after the crew of AirAsia flight D7237 asked passengers to ‘say a prayer’ during the emergency mentioned earlier – something which has dominated headlines around the country since.

The Advocate reached out to AirAsia for comment, but have yet to receive a reply.