In breaking news out of Melbourne, it’s been confirmed tonight that Queensland centre Will Chambers is set to get his first decent night’s sleep in well over a year.

For some reason, Fittler has decided to leave arguably the most explosive player out of the must-win for the southern state in a move that has plenty in the great state of Queensland chuckling.

The changes came as well as other changes like Fittler sticking with Nathan Cleary again, and bringing in Blake Ferguson who seemingly failed the ‘no dickheads policy’ when he thought NSW was going to win, but passes the test for Game Two.

This follows Kevin Walters decision to stick with the same Queensland team bar a couple of changes forced by injury, as is the norm in the successful winning culture that is the Maroons setup.

While many are scratching their heads at the Latrell omission it can be confirmed that Will Chambers is going to get a few great nights sleep now he doesn’t have to have bad dreams about come up against the rampaging centre from NSW. 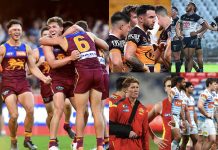