Peter Betros, chairman of the Queensland Rugby League has given notice of the organisation’s intent to submit an application calling for the canonization of North Queensland Cowboy’s player Jonathan Thurston to Saint Thurston.

The application will be made to the Congregation for the Causes of the Saints, making the case that Thurston meets the requirements of having performed at least two miracles. 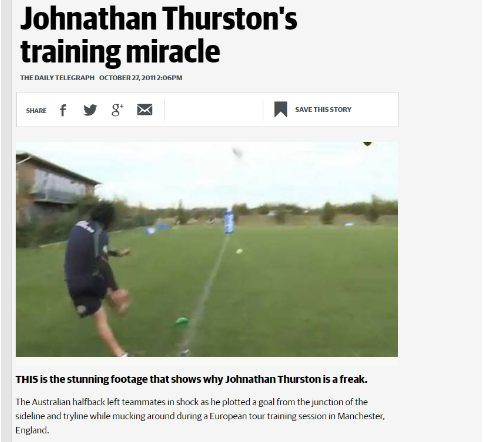 The diocese of the candidate miracle then conducts its own tribunals, scientific and theological. The scientific commission must determine by accepted scientific criteria that there is no natural explanation for the alleged miracle.

“There is simply no valid scientific evidence to suggest that Thurston’s kick, made in October 2011, was anything but a miracle,” said Betros “St. Josephs bodily levitation surely has nothing on not one, but two kicks from the corner post.”

“There was a mad wind so a few of the boys were just mucking around and I slotted a few. It was easy,” Johnathan Thurston said. 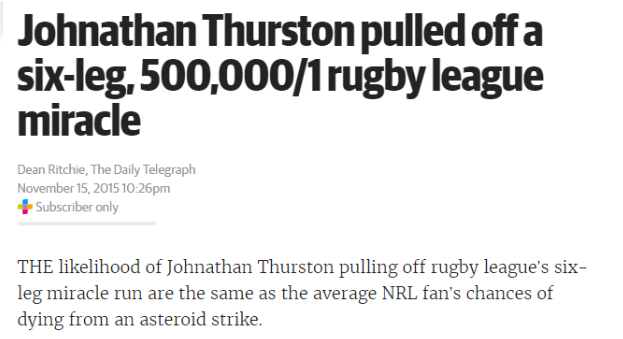 One miracle is not enough to qualify for canonization, however, and Archbishop Mark Coleridge of Queensland was called forward to submit evidence of a second miracle.

“But the combination of the NRL premiership, Dally M Medal, Golden Boot and Clive Churchill Medal really cemented his place in Christian lore- the odds of such an occurrence are comparable to the sun and planets aligning (the archbishop noted that they all orbit the Earth).”

“If you had asked me at the start of the season, mathematically, you would have got 524,160 to 1,” the Archbishop stated when asked about the chances of Thurston achieving such a magnificent year.