After another tough loss for the Newcastle Knights, it can be confirmed today that there isn’t much of a vibe in the Steel City right now.

After a thumping at the hands of the perennial chokers the Parramatta Eels 10 days ago, the Knights were absolutely toweled up by the Melbourne Storm yesterday.

The 50-2 shellacking in front of a Sunday arvo home crowd has since left the Rugby League fans in the region searching for answers.

The Novocastrians are now sitting in the wooden spoon position.

Initially tipped as dark horses for a premiership in 2022, it’s believed the Knights have now officially run aground worse than the Pasha Bulker in 2007.

With a relatively stacked roster including a swathe of Origin reps, it’s not yet known exactly how the Knights are so flaccid right now, but it’s believed Joey Johns has asked Gus Gould to come up and run a training session.

Now, with things at rock bottom, fans of the Blue and Reds have confirmed that vibes are at an all-time low in coal country.

“We were supposed to be shit a few years ago. We managed our expectations,” sighed 54-year-old Hamilton Walls-End.

“We weren’t supposed to be this shit now.”

“And we don’t need losses like that on a Sunday arvo.”

“Looks like it’s another year of clinging to the 90s for this town.”

“Maybe we shoulda signed Luke Brooks after all.” 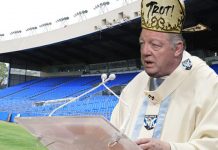