The lifelong Matilda’s and Liverpool fan said this Friday is one like no other.

“YNWA,” she said triumphantly over a scalding long black at her desk at some nameless business peoples firm in the Old City District.

This follows the announcement of Australia and New Zealand earning the rights to host the 2023 FIFA Women’s World Cup and her club team Liverpool winning the Premier League for the first time in 30 years.

“No longer is it ‘this does not fucking slip now,'” Natalie sighed with relief.

“Because it cannot. We have finally done it,” said the fan of a club who have suffered plenty of heartache over their long and storied history.

“And, even better, we’ll have a World Cup on home soil,” said the delirious fan who has been up since 1:30 am, when she eagerly awoke to watch the FIFA announcement.

The Trans-Tasman bid beat Columbia by 22 votes to 13.

The World Cup has been lauded as a huge moment for Australia sport, with hopes for over a million fans attending the event, and hundreds of thousands of tourists coming down under.

“I’m probably going to struggle to make it past lunch, but I don’t even care,” said Natalie whose liked about 50 different Liverpool and Matilda’s related posts today already.

“Some good news in this fucking quagmire of shit that is 2020.” 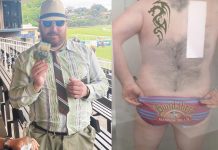