These Indians are beyond the pale.

They come to OUR country, flout OUR social distancing measures, and then complain about what they apparently heard OUR boys yelling at them.

India made an official complaint to the ICC on Saturday night over alleged comments made to Mohammed Siraj and Jasprit Bumrah on day three of the Sydney test – stopping play for eight minutes.

The halt in play brought the issue to a head, with NSW Police and Cricket Australia launching separate investigations into the second incident.

Those who know anything about cricket, of which I admit I am not one, tell me that sledging is a part of the game.

But when does a slur cross the line?

Apparently when the Indians decide it’s too hot in the kitchen.

If you ask me, a simple newspaper columnist, there is a very real threat of censorship in this country – an absolute affront to free speech.

And yesterday was case in point. If our young cricketing enthusiasts are not allowed to niggle subcontinental opponents after a day of drinking in the sun – then we may as well pack up the wickets now and begin dancing in unison like they do in your Bollywood movies.

Now to what was actually said.

Some fans say they heard racial epithets, others claim it was all above board.

What was apparently said is hardly the issue. The issue is, what is more likely?

Are the Indians making up false accusations?

Or do we really believe that a group of drunken Australian men in their early 20s would simply yell racist abuse after three days of heavy drinking while wearing watermelons on their heads.

I think we all know which is more believable, and it isn’t the latter.

So I say this to the arrogant Indian visitors, leave our poor crowds alone.

We as Australians know what we are capable of, and this kind of bigoted vitriol is beneath us. These young men were wearing Hawaiian shirts – a true testament to the success of Australia’s multicultural experiment.

We are not racist, and to accuse us of being even casually racist, is in fact racist.

You should focus on the cricket. That’s what you are paid to do. Not provide running commentary on Australia’s fictional social issues.

And if you don’t love it here, then you can simply leave. It’s that easy.

ABOUT THE COLUMNIST: BRUCE MCAFFERTY is 70-year-old former property developer who rose to prominence as a member of the politically conservative ‘White Shoe Brigade’ responsible for the early tourism development on the Gold Coast and Far North Queensland during the Bjelke-Petersen years. After an early retirement triggered by the Fitzgerald Inquiry, Mcafferty has spent his twilight years calling into talkback radio stations to complain about how even the slightest changes in social policy make him feel uncomfortable. However, in a testament to his willingness to show compromise during cultural debates, Mcafferty voted YES in the 2017 gay marriage plebiscite. He believes there is no such thing as a short straw in this country, and that the growing welfare state poses a much greater threat to Australian life than any so-called pandemic or climate disasters. 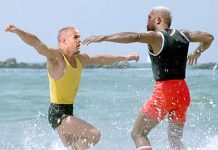