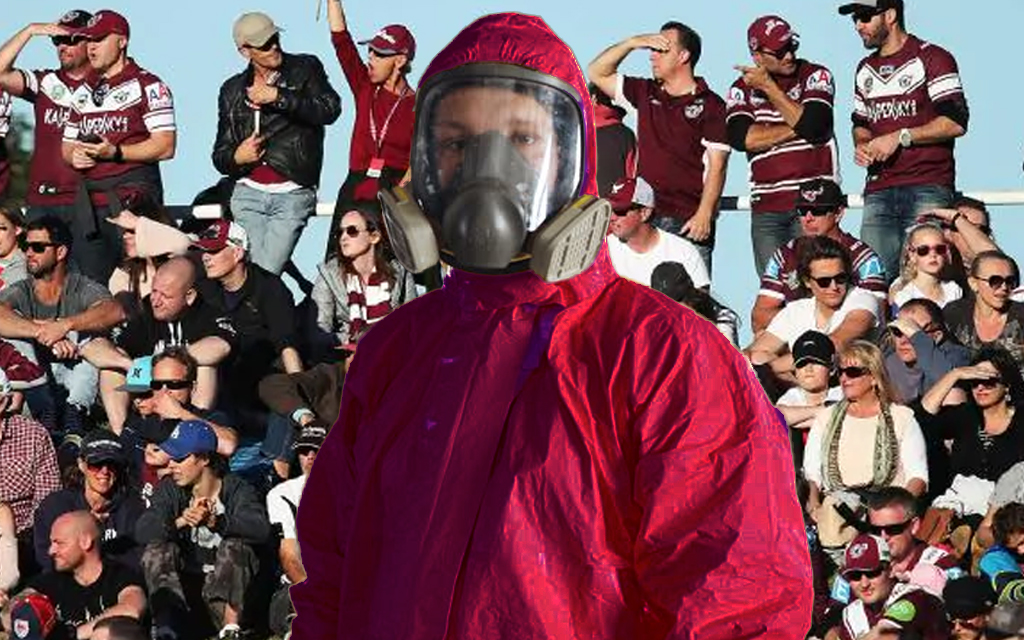 For the first time since James Hardie was the lead sponsor for the Parramatta Eels, the NRL has today brought back supporter hazmat suits.

This comes as Manly’s home final at Brookvale Oval is scoured by local contractors to locate the traces of asbestos that were found at the suburban ground.

The NRL has confirmed small traces of asbestos were found on the Brookvale Oval hill on Friday, with a report due to be submitted to the league this evening

Ticket sales for the elimination final against Cronulla have been put on hold, until every ticketholder can be equipped with protectivewear for an extra $39 dollars. The match still to be scheduled for Saturday night, un

The traces were found as part of testing for the standard excavation planning at the northern end of the ground. Initial conspiracy theorists claim this may be an inside job by Liberal Party staffers, who are angling for a Shark Park grand final to allow the Prime Minister the opportunity for a bit of baby kissing in his home electorate before Cronulla get ousted from the finals.

However, Many fans are refusing to say die with their scheduled home game – with some local residents volunteering to risk their lives by going full Fukushima and venturing to clean up Lottoland Hill completely unmasked as a civic duty.

“Our number one priority is ensuring the safety of our players and fans,” NRL chief executive Todd Greenberg said in a statement.

“Who would have thought the Silvertails would end up being plagued by these dangerous traces of fibro!”

“Aaha nah but seriously. This shit is dangerous. Please make sure you pick up your suits at the gate”