In a rare turn of events, The NRL has decided against inventing a new franchise out of thin air and decided to bump up an existing team to enter the competition in 2023.

Yesterday, the iconic Queensland rugby league club, The Redcliffe Dolphins received confirmation that they have been awarded a licence to become the NRL’s 17th team. Veteran man-manager and outgoing South Sydney darling Wayne Bennett is expected to be announced as their inaugural coach

The storied Dolphins now must begin preparations to assemble 30 top-class players to form a squad from which a 17-man team can be picked before Round 1, 2023. Less than 18 months from now.

Dolphins chairman Bob Jones has said he will hand full responsibility of recruitment to the Wayne Bennett.

Jones was asked specifically who he wanted to sign to pull on the Dolphins jersey.

“Probably anyone in the Test team,” Jones said.

“And if we can get the rest of the Test team… that would be wonderful.”

However it seems the NRL might have a bit to offer.

While the game’s executives say they are fully supportive of the Dolphins boards plans to let Bennett put together a player roster, they also would like to have a little bit of input on signing players that are known to help get a new club off the ground in Queensland.

“There is something to be said for the Titans playbook” said NRL Commissioner Peter Beattie.

“Basically in 2008, we had to sell a rugby league club to a town that was already in the midst of an AFL expansion”

“That’s what we wanna do with the Dolphins”

However, Beattie has clarified when he says ‘big names’ he means BIG names.

“We have managed to convince Mark Minichiello, Scotty Prince and Matty Rogers to dust off the boots”

“We”re doing it again. We’re getting the original Queensland expansion boys back together!”

“So while we’ll let Wayne and the Dolphins put together the rest of the team, we at least want those boys on board”

“And maybe Chris Walker and Preston too. If they are up to it”

“Actually has anyone heard from Lelea Paea lately?”

“What about ‘Waltzing’ Matt Hilder?” 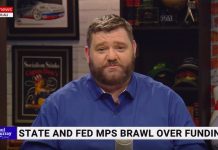 Report: Fuck This Bloke Is A Dribbler