It’s not often that a group of Australian men are all required to dress the same, and dress well, in the middle of the day.

However, this afternoon in leagues club function room on Betoota’s southside – a group of close mates had to do just that – to celebrate the end the best and fairest of the Betoota Dolphins rugby league season.

It’s been a relaxing morning so-far, as the players indulge in some sort of a champagne breakfast as they would at the races.

However, club captain, Anthony appears to be in a panic just minutes before he is due to give the opening address to the club, players, partners and volunteers.

As someone who has only worked outside with his hands, and never went to a Catholic school, Anthony does not now how to do a tie.

While his mates all ridicule him, it becomes clear that none of them are that confident with this level of formal dress either. He is offered no advice.

Luckily the day was rescued by Anthony’s vice-captain, prop and proud Samoan-Australian, Junior. Who arrives back from doing his hair just in time.

“What’s this then?” asks Junior, who can’t understand what all this hysteria is about.

Like many Polynesian Australians, Junior specialises in the unique and lesser-known accessorising of formal dress.

“This is how we used to do it at church” says the 120 kilogram father of two as he gently does up his brother’s tie.

“Just the double loop, and the uhh – the old switcheroo here”

“Watching!?” he yells at the others.

“Swear to g, you palagis don’t know how to dress aye” 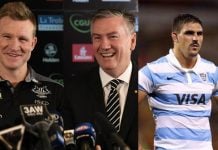